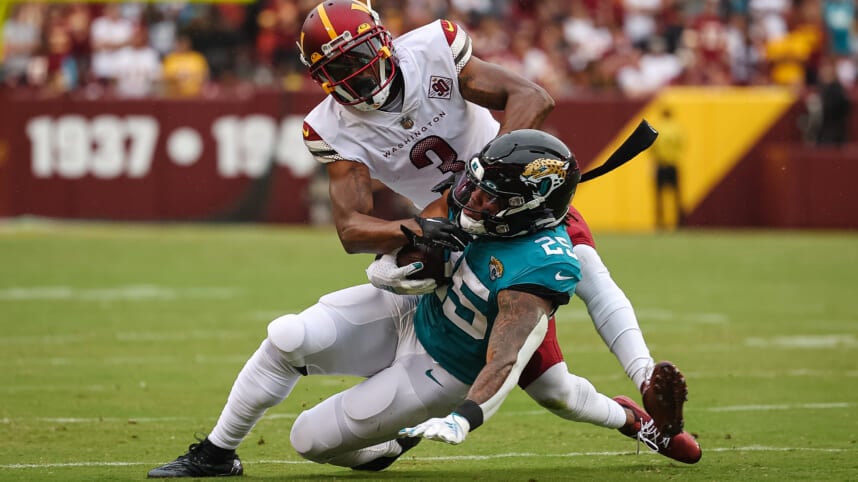 The New York Giants have found success on defense without having two stellar cornerbacks, but rather just one in Adoree Jackson. Jackson has started the year on a high note, despite getting banged up a bit against the Green Bay Packers this past Sunday.

In fact, he has provided solid secondary coverage and aggressiveness in run defense, making six stops in the run to limit opposing offenses. In coverage, he’s allowed 199 yards on 13 receptions, being picked on against Dallas a bit, allowing seven receptions on eight targets for 69 yards and a touchdown.

However, without him, the Giants defense wouldn’t have the same assurance in the secondary. With that being said, CB2 is a bit open, with Aaron Robinson potentially out for the season and a myriad of reserves filling in.

Currently, the Giants have been utilizing Fabian Moreau as a primary starter, but they could look at the trade market to acquire another talented player who could make a significant impact the rest of the way, especially if the Giants continue to win football games.

The New York Giants should gauge the price tag of Williams Jackson III:

Wink Martindale predicates his defensive aggression on schemed blitz packages and man coverage on the outside, which fits the mold perfectly for what Jackson desires. He’s played in 204 snaps this season, allowing 219 yards and two touchdowns, failing to communicate efficiently in their heavy zone scheme.

However, transitioning to the Giants would allow him to extrapolate on his strengths rather than fight against his weaknesses. The problem is Jackson, signed a three-year, $40.5 million deal in 2021, but Washington will take up the majority of his cap hit the rest of the way. He would be owed just $3.8 million, which is still a significant amount given the Giants have only $3.6 million available.

It is possible that general manager Joe Schoen would look to trade a player that holds a bit of salary, offloading some financial burden to fit Jackson onto the roster. After the 2022 season concludes, Jackson has an out in his deal and would count $9 million in dead money, the majority of which will go to Washington.

Otherwise, he will be owed $15.75 million for the 2023 season at 31 years old before becoming a free agent. That is a substantial number the Giants likely wouldn’t want to take on given the investment they made at cornerback, to begin with, the past two off-seasons.

However, the Commanders are likely willing to take a late-round draft pick in exchange for Jackson, and the Giants might be able to convince him to rip up his contract and sign a more team-friendly extension, given he will likely hit free agency and see a significant decrease in his earnings regardless.

Given the Giants don’t have the best salary situation at the moment, courtesy of Dave Gettleman, there are ways to make this work, and Jackson would provide them with a strong cornerback to pair with Adoree the rest of the way.