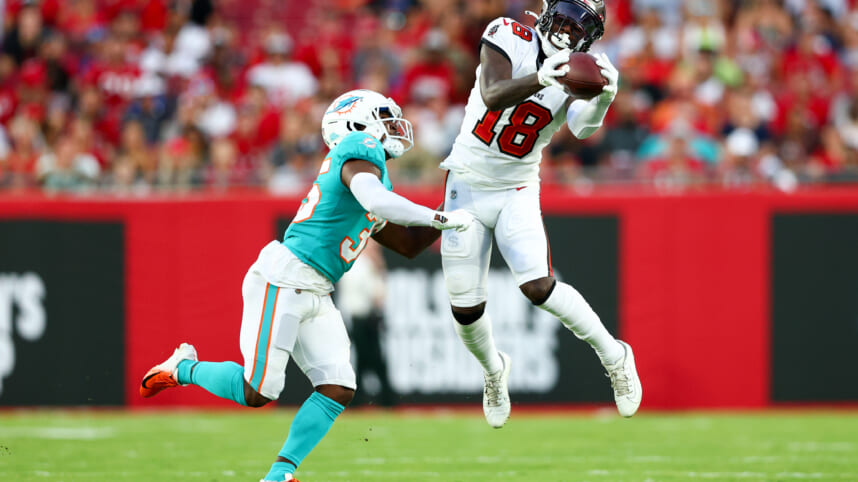 With 32 NFL teams cutting down their rosters from 80 to 53 players, many surprising players are coming available. For the New York Giants, one particular wide receiver is worth making a claim for.

What Tyler Johnson would add to the New York Giants:

Johnson offers some size over 6-foot-1 and 200 pounds. He has played in 31 games over his first two years, appearing in all 17 last year for the Buccaneers. Throughout his first two seasons, Johnson has 48 catches, 529 yards (12.1 yards per catch), and two touchdowns which both came during his rookie year. Johnson caught 36 passes for 360 yards in 2021.

For the Giants, wide receivers are needed. Some potential regular season contributions from players like Collin Johnson, who landed on injured reserve, and preseason star Alex Bachman who recently got released, lead to a reimbursement for the receiver group.

Johnson would provide the Giants’ offense a contested catch target who can play inside and out. He is well-known for his terrific ball skills. Lastly, Johnson uses his size after the catch, where he exhibits great play strength.

With one final opportunity in his first offseason to improve the roster before the regular season, it will be fascinating to see what moves Joe Schoen makes. Johnson is a young player with some experience and production with talent. He could potentially provide more insurance for the Giants’ group of wide receivers.