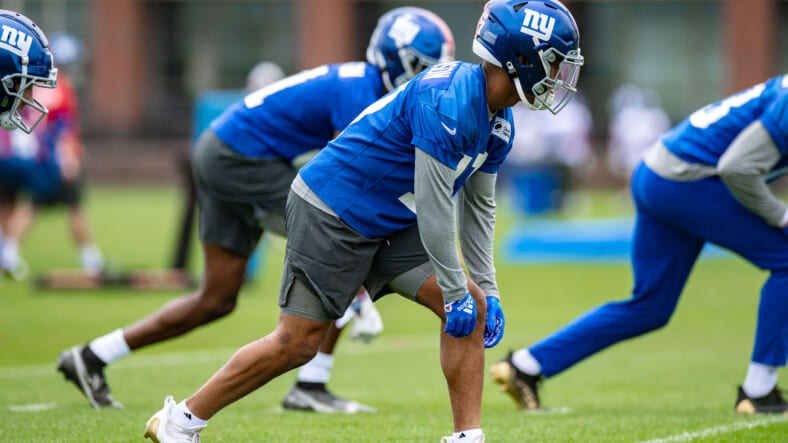 The New York Giants have begun trimming their roster, making five required cuts to lower their total of players from 90 to 85. In just a few short weeks, the Giants will have to get their roster from 85 players all the way down to 53. Players are competing for roster spots and one of the most interesting position battles for the New York Giants is that of wide receiver. The wide receiver corps could change significantly amidst roster cut-downs.

The New York Giants’ starting wide receivers are locked-in. Kenny Golladay will continue to play as the team’s primary receiving threat after signing a four-year, $72 million contract last offseason. Opposite of him will be the second-year receiver, Kadarius Toney. The slot will be manned by rookie second-round pick Wan’Dale Robinson. And, of course, once Sterling Shepard is healthy and activated off the PUP list, he will also rotate in the starting lineup.

Behind the starters, though, are some interesting roster battles. Collin Johnson and Richie James Jr. have stood out this summer with impressive performances in training camp, as well as solid performances in the Giants’ preseason debut last Thursday. Collin Johnson hauled in a team-high seven receptions for 82 receiving yards against the Patriots. Richie James Jr. caught three passes for 44 yards and one touchdown.

Collin Johnson and Richie James Jr. are receiving ample attention after their hot starts to the preseason. But there are other receivers competing for roster spots, like veteran deep-threat Darius Slayton. Slayton has been a starting receiver for the Giants since his rookie season in 2019. But he has recently been pushed down the depth chart and could soon be traded. It seems like Big Play Slay’s days with Big Blue are numbered.

C.J. Board is another player to keep an eye on as the Giants trim their roster. Board has received regular season playing time in the past. But the key attribute that could earn Board a roster spot is his ability to perform on special teams. This might give him an edge over some of the other guys.

David Sills V was a training camp standout last year. Fans rallied behind the undrafted signee. However, his spectacular 2021 summer has not been replicated this year and Sills seems unlikely to earn a roster spot.