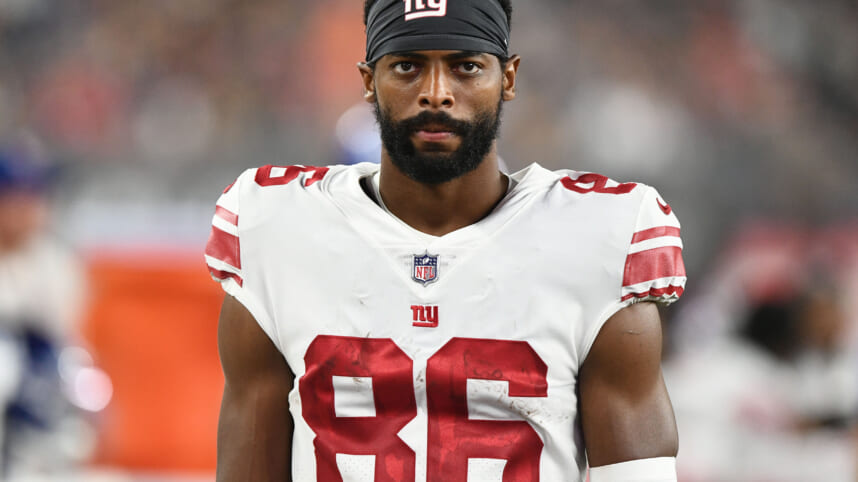 After a disappointing performance from cornerback Aaron Robinson during the New York Giants‘ first preseason game against the New England Patriots, they may want to consider adding more competition into the mix.

However, the Giants only have $5.4 million in salary space and could be looking to open up a bit more flexibility for a free agent acquisition. If they want to take that route, one contract they could look to offload is that of Darius Slayton. Slayton is prepared to earn $2.6 million against the cap this upcoming season with a $2.54 million base salary.

Last season, Slayton recorded the lowest amount of yards in his entire career over 13 games. He earned 339 yards and two scores with a 44.8% catch rate, the worst in his career. There’s a legitimate argument to make that replacing him with either Collin Johnson or Richie James could be an efficient move, especially since James provides value on special teams.

The New York Giants will likely move on from Slayton:

While Slayton offers good downfield speed, he may not fit the new scheme the Giants are installing. The idea of spreading out the offense and getting playmakers into space favors options like Kadarius Toney, Saquon Barkley, and Wan’Dale Robinson far more than a straight-line burner like Slayton. However, the Giants tried to get him ample playing time against the Patriots on Thursday. He hauled in one catch for 17 yards but was targeted twice before being pulled after a slight hamstring issue. He also picked a rushing attempt on an end-around for two yards.

The Giants have primarily been utilizing Darius with the second team during practice, so it was strange to see him feature with the first team, which could have been correlated to potential trade partners. Putting him on display for other teams might’ve been a good strategy to draw in a potential suitor, helping the Giants clear his salary off the books.

If the Giants do manage to find a trade partner, one cornerback free agent they could look into is Jimmy Smith, formally of the Baltimore Ravens.

Smith played in 293 total defensive snaps last year with Baltimore. Smith is well experienced in Wink Martindale‘s defense as a former first-round pick back in 2011. At 34 years old, he’s undoubtedly headed toward the end of his career, but he could provide some value for the Giants on a cheap one-year contract, even if it means mentoring Aaron Robinson a bit.