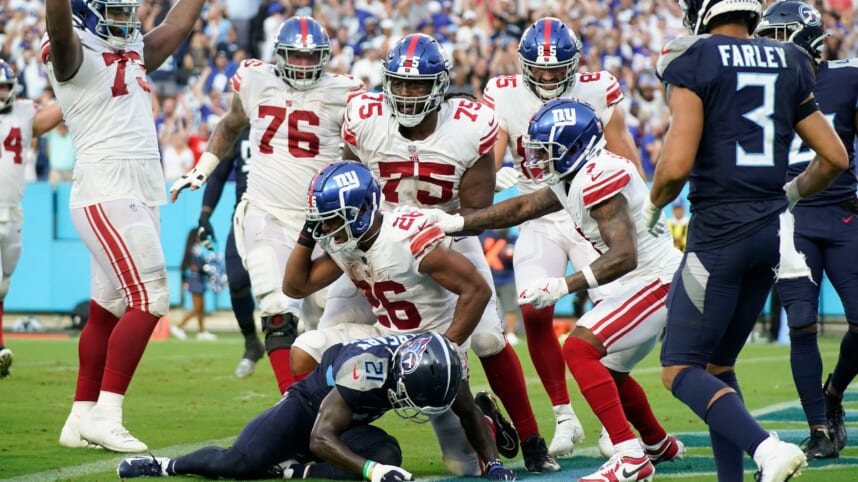 The New York Giants are already facing significant injury issues on the defensive side of the football, and with a severe lack of depth at multiple positions, defensive coordinator Wink Martindale is certainly walking a tightrope.

Considering both of Wink’s premier edge rushers, Kayvon Thibodeaux and Azeez Ojulari, have been nursing individual injuries, he’s been forced to utilize backups. Jihad Ward and Oshane Ximines performed valiantly against the Tennessee Titans, but the Giants sorely miss their top pass rushers.

The New York Giants should play it safe with Kayvon Thibodeaux:

Thibodeaux was getting close to making a return, stating his optimism to play against the Carolina Panthers this Sunday, but it’s likely the Giants give him one extra week of recovery time.

“Getting close,” Thibodeaux said Thursday. “Like I said, trying not to look too far — what is today? Today is Thursday – still have Friday, Saturday. I’m really confident in this Sunday.”

“We’ve been making great gains,” Thibodeaux said. “Ultimately it will come to how I feel on Friday and Saturday. But everything is going well and I’m optimistic about it.”

Nonetheless, Martindale still feels comfortable with his reserves outside linebackers, especially if he plans to dial up the pressure in Week 2. The team ranked 3rd in blitz rate last week among all NFL teams, but Wink indicated that he hasn’t fully opened up the defense just yet, which is exciting.

However, after an optimistic performance against the Tennessee Titans, quarterback Aaron Robinson had his appendix taken out, which will keep him out for a few weeks. In his stead, it is expected that the Giants will elevate Fabian Moreau from the practice squad, and while he has starting experience, he’s only been on the team for two weeks or so.

Last season, Moreau gave up 523 yards and seven touchdowns in coverage but had a few stand-out performances mixed in with some devastatingly bad ones. At 6-foot and 200 pounds, Moreau has played in over 2,780 snaps as a professional player, giving up the most touchdowns in his career last year by a significant margin. He spent the first four seasons of his career with the Washington Commanders as a boundary corner, starting two of those seasons.

At the very least, he offers plenty of NFL experience, which is something the Giants seriously lack at the cornerback position. In addition to their adversity at both cornerback and pass rusher, the linebackers are also extremely thin.

With Tae Crowder and Austin Calitro manning those two spots, sprinkled with a bit of Micah McFadden, the Giants will have to dial up a unique blitz package to keep a more athletic Carolina offensive at bay.

Stopping Christian McCaffrey is easier said than done, but the Cleveland Browns got the job done last week, limiting him to just 33 yards on the ground. Stopping him as a receiver is another ball game, so we should expect to see a lot more 3-safety looks with Dane Belton, rookie out of Iowa, returning this week from a broken clavicle.