New York Giants: Why Darnay Holmes will have a breakout 2022 season 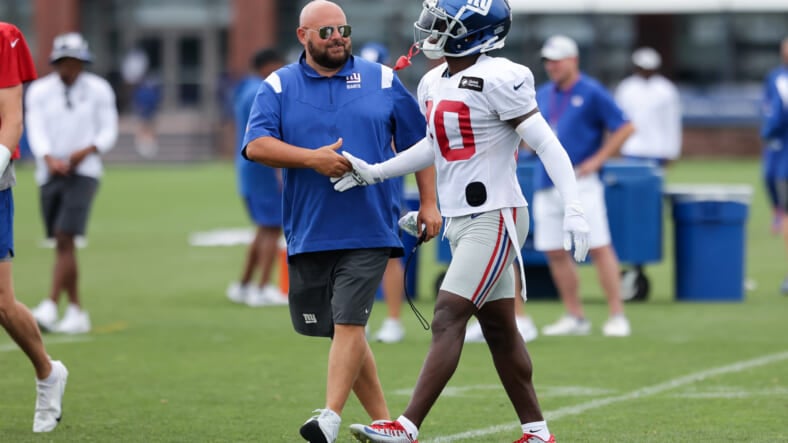 The New York Giants have seen a number of players stand out during their 2022 training camp. The flashiness of offensive players like Wan’Dale Robinson and Saquon Barkley has stolen the attention and grabbed the headlines. However, there is a young player making a name for himself on the defensive side of the ball. Darnay Holmes has stood out tremendously this summer and appears to be in line for a breakout 2022 season.

Why Darnay Holmes will have a breakout 2022 season

Darnay Holmes is entering his third year in the NFL. The Giants’ previous regime drafted him in the fifth round of the 2020 NFL Draft. Holmes played boundary cornerback during his collegiate career at UCLA but converted to the nickel pre-draft. At the 2020 Senior Bowl, Darnay played in the slot and turned heads at the new position. Since being drafted by the Giants, the nickel cornerback position has been his designation.

But Darnay Holmes had not really solidified himself as the first-team slot cornerback during his first two seasons with the Giants. There was a bit of a revolving door in the nickel that Darnay would rotate in and out of for a variety of reasons (one of those reasons being a couple of injuries). However, this summer, Darnay Holmes appears to have solidified his role as the New York Giants slot cornerback.

A breakout season seems to be in store for Darnay Holmes. The third-year defensive back out of UCLA has been dominant at Giants training camp. He has been a consistent playmaker and forced a turnover on four straight days of practice to kick off the camp.

The New York Giants have a bit of a camp competition ongoing at slot cornerback. Outside of Darnay Holmes, players such as Aaron Robinson, Cordale Flott, and Dane Belton could attempt to steal the position. But Holmes has risen to the occasion.

Darnay logged four starts in 2021, recording one interception, two passes defended, and 29 combined tackles. 2022 could be his breakout season. After two solid years in the NFL, year-three seems to be the perfect time for Darnay Holmes to overtake the slot cornerback position in the New York Giants defense.

Holmes is having a fantastic camp — hopefully he can carve out a big role for himself these season #NYG pic.twitter.com/p9twe3u5Gj

Don’t write off Darnay Holmes, I have him pencilled in as the starting nickel corner this season.