New York Giants: Why cornerback Aaron Robinson could have a breakout season 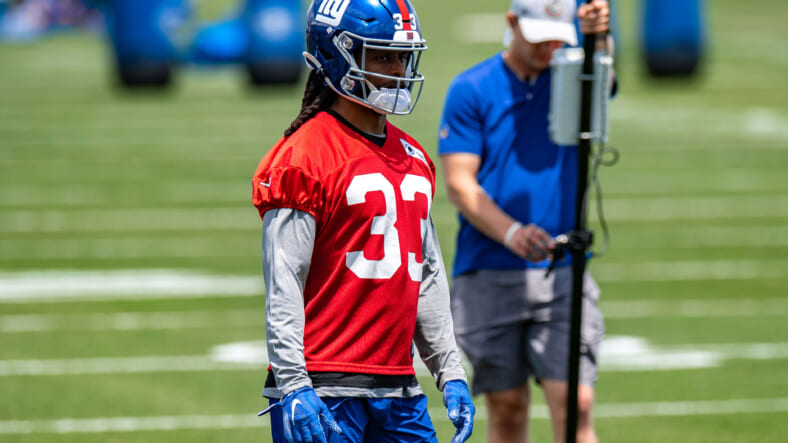 The New York Giants rebuilt their defensive secondary this offseason. Due to salary cap limitations, the Giants had to part ways with a number of 2021 starters in their secondary. Logan Ryan, Jabrill Peppers, and James Bradberry all departed this offseason. The Giants made some new additions, but young guys already on the roster will need to step up in 2022. As he enters his sophomore season in the NFL, cornerback Aaron Robinson could have a breakout campaign.

Why Aaron Robinson could break out in 2022

Aaron Robinson flashed promise as a rookie in 2021. The New York Giants drafted Robinson with the no. 71 overall pick in the third round of last year’s draft. The Giants traded up to make the selection. The UCF product stood out to the Giants’ previous regime as a physical cornerback that could fit well into their man-press-heavy defensive scheme. Aaron Robinson battled injuries as a rookie, but when he was on the field, he showed why the team was so high on him.

In 9 games, Aaron Robinson made 2 starts and recorded 3 passes defended to go along with 26 combined tackles. He allowed only a 63% completion percentage (19/30) for 204 yards and 1 touchdown. Robinson was impressive as a run defender in the slot during his rookie campaign. This came as no surprise, though, as he posted 80+ PFF run defense grades in each of his final two seasons at UCF.

Unless the Giants sign a veteran CB, Aaron Robinson is in a good spot to compete for the starting CB2 spot.

Here's an aggressive play on a WR bubble screen. Sheds the block easily and shows off his speed and tackling. pic.twitter.com/5yGjaEPc7E

With the recent departures in the Giants’ secondary, an opportunity has opened up for Aaron Robinson. As a rookie, Robinson competed for snaps and played as a rotational player in during the second half of the season. The second-year cornerback should see significantly more playing time this year and could even open the year as a starter.

Aaron Robinson played as a slot cornerback in the Giants’ defense last year. However, his physicality, strength, and height combination could make him suitable for the outside. Robinson’s flexibility to play inside and on the boundary gives him more than one chance to earn a starting job. There could be a training camp battle for the starting cornerback position opposite of Adoree’ Jackson. Aaron Robinson’s physical playing style could earn him the starting job and lead to a breakout sophomore season.