New York Giants: Why Azeez Ojulari could have a breakout 2022 season 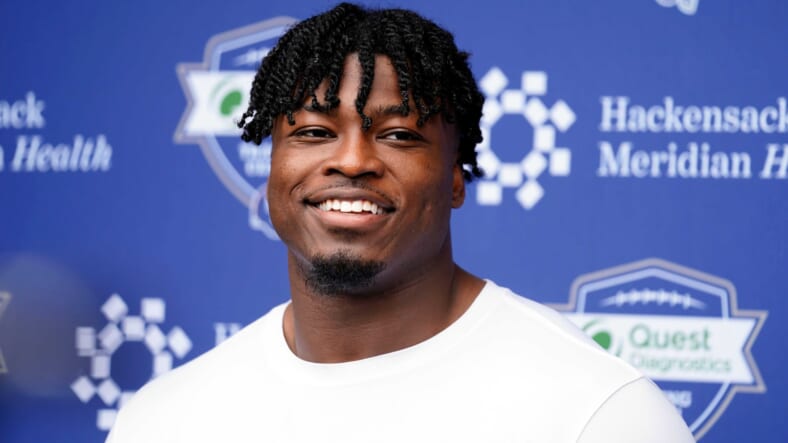 All eyes are on New York Giants first-round pick Kayvon Thibodeaux. With the fifth-overall pick in the 2022 NFL Draft, the Giants drafted Thibodeaux, arguably the best player in the draft class. It was an electric draft pick that rejuvenated the fanbase. Fans are over the moon, filled with excitement for their new rookie pass-rushing stud. However, Kayvon Thibodeaux is not the only young pass-rusher that Giants fans should have excitement in. 2020 second-round pick Azeez Ojulari could have a breakout season in the 2022 season.

Why Azeez Ojulari could have a breakout 2022 season

Azeez Ojulari had a stellar rookie season. He racked up an impressive eight sacks in his first season along with 49 combined tackles and eight tackles for loss. He also forced a fumble and defended two passes. Ojulari’s rookie season was highlighted by a stellar performance against the Carolina Panthers in Week 7.

Azeez Ojulari’s performance against the Panthers was just a glimpse of the potential that the young pass-rusher possesses. There could be more in store for Azeez in 2022. Ojulari entered the NFL at 6-foot-3, 240 pounds. Since then, he has bulked up to a solid 255 pounds. The added weight should allow Azeez to play with more strength and power as a pass-rusher this season.

Playing opposite of Azeez Ojulari will, of course, be rookie Kayvon Thibodeaux. Many expect Kayvon to be a star from day one, a Rookie of the Year candidate. As opposing offenses focus on Thibodeaux, they will gameplan to slow him down, sending double-team blocks his way. This should lead to more one-on-one opportunities for Azeez Ojulari as he enters 2022, already with a year of NFL experience under his belt. The New York Giants could be building a fierce pass-rushing duo with these two young edge rushers.