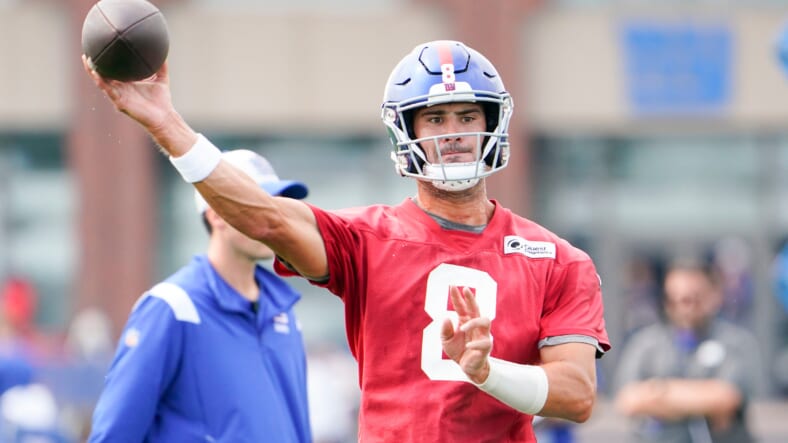 The New York Giants are gearing up to take on the New England Patriots on Thursday night in their first preseason game of the 2022 season. The Giants have a lot of kinks to work out after showcasing inconsistent training camp practices muddied by poor offensive execution.

However, the Giants and head coach Brian Daboll have utilized specific situational drills to test individual players. Most of the practices were designed to create adversity, forcing the players to overcome difficult scenarios.

With that in mind, planning for a preseason game is usually a bit more flexible compared to a regular season contest. There will be primary Takeaways, notably on the offensive side, as they install a brand new system with a fresh line in place.

First and foremost, the Giants’ offense will only be as good as their line in the trenches. Signing Mark Glowinski to lock down right guard and drafting Evan Neal at right tackle should improve the unit significantly. Andrew Thomas is 100% healthy, and Shane Lemieux is back from a partially torn patellar tendon that required surgery last season.

By most accounts, the OL for the Giants should be much improved, but it will take time for them to gel and develop chemistry. The team’s first preseason game should give us a bit of insight into how far along they actually are.

In the eyes of Wink Martindale, Thibodeaux is made in a lab to play outside linebacker in the NFL. The Patriots aren’t expected to utilize any of their starters, so it should be fun to watch Thibodeaux demolish their back-up offensive lineman.

3.) Daniel Jones’s comfort in the offense

The biggest takeaway will ultimately be Daniel Jones’s comfort in the new offensive system. The Giants have been slowly progressing, but the new scheme is in place ahead of the regular season.

Via the New York Giants.

Thursday’s game will give us a bit of knowledge into how far along Jones is and the comfort levels he contains about a month away from Week 1. Showcasing a bit more flexibility and creativity would go a long way toward instilling more faith in the fan base, one who seems to grow ever more aggressive as negative attention engulfs the fourth-year quarterback.