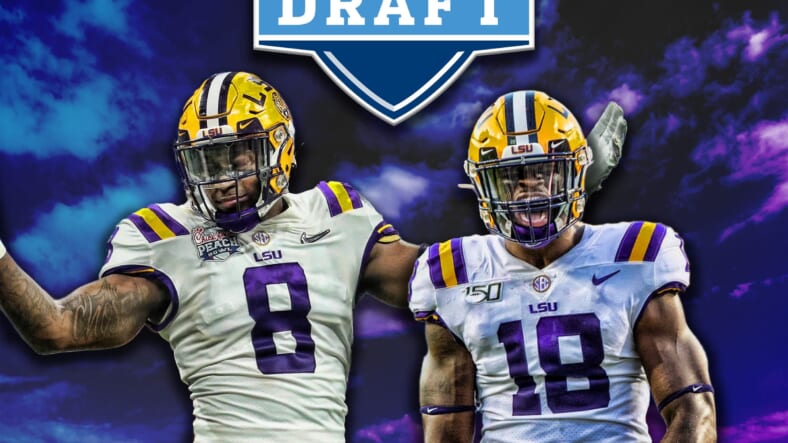 The New York Giants hold the fourth overall pick in the 2020 NFL Draft. For now… And maybe forever. But the opportunity still exists for New York to trade back and grab extra draft capital. General manager Dave Gettleman stated in February that the Giants are “open for business.” He admitted that the team is open to trading down from fourth overall but he also indicated that they do not want to trade down too far.

Gettleman does not want to trade back and compromise the talent-level of his first selection in exchange for additional picks. He only wants to trade back if he can ensure himself a top-tier prospect. But there are two LSU defensive prospects available in the later parts of the first-round that could be home-run selections for the New York Giants if they do decide to trade down.

If the Giants do not take Isaiah Simmons at fourth overall, why not take the next best thing? Simmons is not the only linebacker in this class who excels in coverage- Patrick Queen out of LSU does, too. Benjamin Solak of The Draft Network described Queen as: “A highly adept zone cover defender who overlaps short zones with ease and makes high-quality plays accordingly.”

Patrick Queen is an athletic inside linebacker, considered by most to be the second-best in this class. He ran a 4.5s 40-yard-dash at the 2020 NFL Scouting Combine to go along with his impressive 18 bench press reps. Queen might be a bit undersized at 6 feet tall and 229 pounds. But he more than makes up for his size with his intensity.

Patrick Queen has a high motor that never seems to turn off. He racked up 85 total tackles in 2019 including 3 sacks and 12 tackles for loss. He also added an interception against top-tier quarterback prospect Tua Tagovailoa of Alabama:

If New York selected Patrick Queen it would have to be after the first twenty-or-so picks. So they would have to be trading down pretty far to make Queen an option. There is a chance he slides into the second round but that is highly unlikely. A trade for Patrick Queen that makes sense: acquiring the ninth and twentieth overall selections from Jacksonville in exchange for fourth overall. The Giants would be moving back five spots, still able to draft an offensive tackle at ninth overall. Queen would then be a strong option at the twentieth overall selection.

There is another Louisiana State product that could make sense if the Giants trade down. Dave Gettleman made it clear this week that the Giants are “not in position” to acquire a “25-sacks-a-year guys.” But he also pointed out that “we havenâ€™t gone through the draft yet” and assured that the Giants “will just keep building it.”

Enter K’Lavon Chaisson: a 20-year-old athletic specimen out of LSU. He did not run the 40-yard-dash at this year’s NFL Scouting Combine, but if he did he would have ranked amongst the fastest at his position. Chaisson made life difficult for opposing offensive tackles in the SEC with his explosive burst off the edge and quickness to get to the quarterback. He stands tall at 6 feet 3 inches and weighs in at 254 pounds with lanky 32 and 1/4 inch arms.

Most draft analysts regard K’Lavon as the second-best edge rusher in this draft class behind only Chase Young. The Giants desperately need a stud, primary pass-rusher off the edge and if they trade down, K’Lavon Chaisson could be that prospect. The LSU edge rusher put his athleticism to good use, dominating the competition for 6.5 sacks and 13.5 tackles for loss en route to a National Championship.

K’Lavon Chaisson is projected to be a mid-first-round draft pick. He has been commonly mocked around the fifteenth or sixteenth overall selection so New York would have to trade back pretty far for Chaisson to become an option.