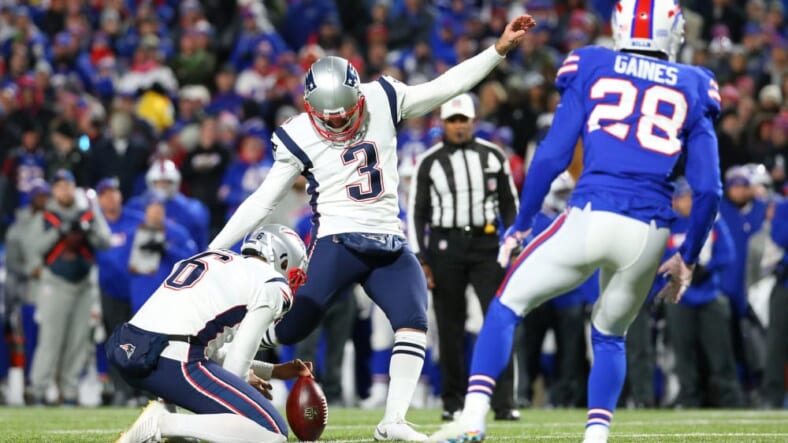 New York Giants fans were, once again, greeted with some disappointing news today. The team’s starting kicker, Aldrick Rosas, has been arrested. According to TMZ Sports, Rosas has been arrested for allegedly crashing his car into another vehicle and then fleeing the scene. Officials believe Rosas may have been under the influence of alcohol.

The details of the incident are disturbing and there is not much room for optimism. Police officers found Rosas barefoot and bloody after fleeing the scene. Aldrick was also driving with a suspended license. A hit and run is a serious crime and it appears that Rosas has committed this crime. Police will soon confirm whether or not Aldrick was also driving under the influence.

Regardless of whether or not Rosas was drunk, this hit and run is an inexcusable and heinous action. The New York Giants need to find a new kicker. Fortunately, there are some solid options available for the Giants to consider.

The first and most experienced option for the New York Giants is Stephen Gostkowski. New York Giants head coach Joe Judge has a connection with this kicker. Joe Judge served as the Patriots’ special teams coordinator from 2015 to 2019.Â Stephen Gostkowski was a member of the New England Patriots for fourteen seasons, from 2006 to 2019. Finally, Gostkowski’s run with the Patriots came to an end last season.

Gostkowski had season-ending hip surgery last season, ending his campaign after only four games. Gostkowski was still efficient before going down with injury, though. He was 7 of 8 on field-goal attempts. However, he struggled mightily with extra points, making only 11 of 15 attempts for by-far a career-worse 73.3%.

Stephen was always extremely efficient on extra points. He went nine full seasons from 2007 through 2015 without missing a single extra point andÂ holds the NFL record for consecutive extra pointsÂ with 479. Gostkowski’s historic career and connection with Joe Judge make him an enticing option for the New York Giants. However, his declining performance last season could be a reason for the Giants to stay away.

Another former New England Patriot makes the shortlist: Nick Folk. Now, Nick Folk is not a long-time Patriots player like Gostkowski. However, he did spend 7 games with the team in 2019 and is still a free agent.

Nick Folk is another veteran kicker. He has been in the league since 2007 and is 35-years-old. He might not be a long-term solution for the Giants, but he can surely contribute some efficient special teams play in 2020.

Jon Brown is a potential young, sleeper option at kicker. Brown has struggled to make an NFL roster since entering the league in 2016. However, there is a ton of untapped potential that the Giants could look to tap into.

At Louisville, Brown as an elite collegiate soccer player. He also served as a kicker on the Louisville Cardinal’s kickoff unit. He appeared in three games, kicked off 9 times, and averaged 62.8 yards per kickoff.

Brown got an opportunity at the NFL level in 2018 and he was pretty impressive. With the Cincinatti Bengals, Brown played in all four preseason games in 2018. He attempted 6 field goals and made all of them in that preseason. He also managed to nail a 55-yard bomb. Unfortunately, his impressive preseason was not enough, and Brown was waived prior to the regular season.

In December of 2019, Brown inked a reserve/futures contract with the JacksonvilleÂ Jaguars. Brown was then waived by the Jaguars in April of 2020. He has bounced around teams as a practice squad kicker. But now that the Giants seemingly have a huge vacancy at the position, they could give Brown a shot and see if he could elevate his game and be elevated from the practice squad.