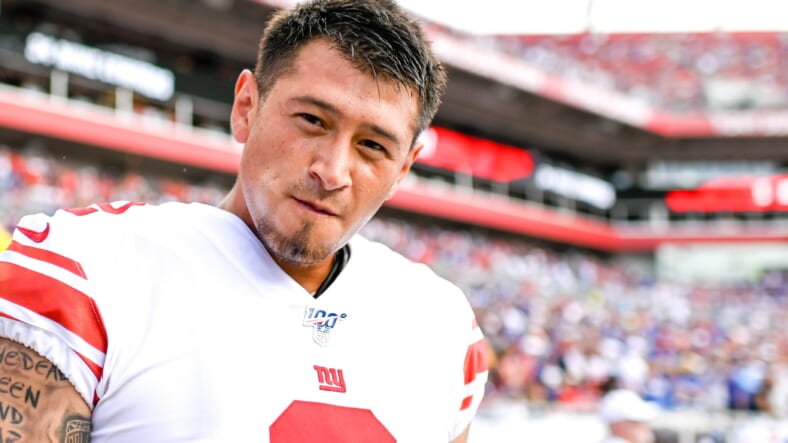 New York Giants Pro Bowl kicker Aldrick Rosas has been arrested for allegedly crashing his car into another vehicle and then fleeing the scene, according to TMZ Sports.

Witnesses reportedly saw Rosas driving a black Chevrolet SUV very recklessly around Chico, California before he struck the side of a pickup truck. After T-boning the truck, Rosas drove away until his SUV broke down from the crash shortly thereafter. TMZ also reports that witnesses then saw Rosas get out of his car and run away.

Rosas was found by police near the site of the crash, where he was questioned. He was bleeding from various parts of his body and officials believe Rosas may have been under the influence of alcohol.

Rosas was booked at Butte County Jail on hit-and-run and driving under a suspended license charge. Investigations are ongoing, and neither the Giants nor Rosas have commented on the situation yet.

This developing story is obviously a huge blow for the Giants, as they very well could now be in the market for a new kicker. Giantsâ€™ head coach Joe Judge just canâ€™t seem to catch a break this offseason, with the COVID-19 pandemic greatly affecting offseason preparation and the armed robbery charges of cornerback DeAndre Baker last month.

Rosas, 25, has been very productive for the Giants since he was signed as an undrafted free agent in 2017. Over the past three seasons, Rosas has converted 62 of the 75 field goals heâ€™s attempted, kicking 82.7 percent. Heâ€™s also made 86 of his 94 extra-point attempts.

Rosasâ€™ best year came in 2018 when he made 32 out of 33 field goals, kicking 97.0 percent, and 31 out of 32 extra points. He made the Pro Bowl that season and was one of the best kickers in football. In 2019 Rosas had a bit of an inconsistent year where he struggled at times, but some think that poor long snapping played a factor.

The Giants had big expectations for Rosas this season and were hoping he could get back to his 2018 form. Now it remains to be seen if he will even be on the team going forward, and all the Giants can do is hope for the best once more information comes out.