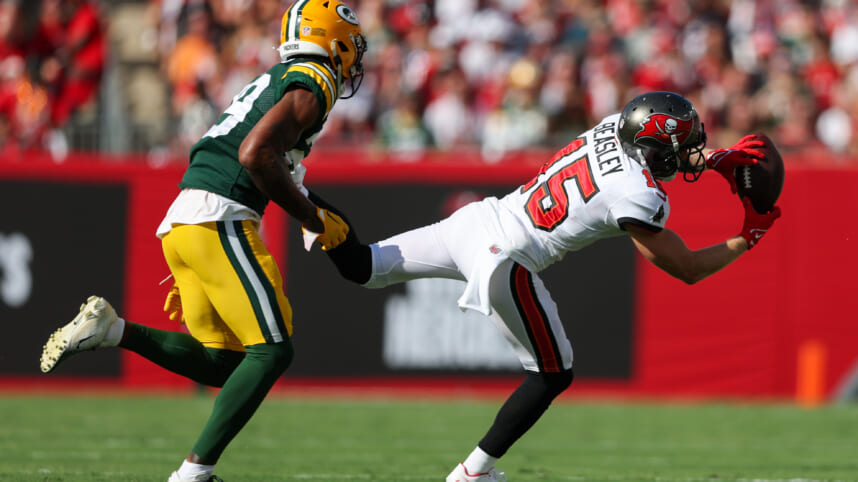 It is no secret the New York Giants need more support in the wide receiver room, especially with Kadarius Toney battling injury and Kenny Golladay being factored out after two weeks.

It is possible the Giants try to get Golladay more involved on Monday night against the Dallas Cowboys, but that doesn’t mean head coach Brian Daboll and general manager Joe Schoen aren’t scouring the market for more opportunities.

Recent rumors have indicated that the Giants showed interest in free agent Cole Beasley before he signed with the Tampa Bay Buccaneers practice squad. The Buccaneers ended up elevating Beasley to the active roster, especially since they were missing slot receiver, Chris Godwin.

However, Godwin is expected to return from a hamstring injury within the next few weeks, so Beasley’s role will be diminished, and he could hit the free agent market once again.

Some continue to wonder why it took so long for Beasley to find a new NFL home. Per a source with knowledge of the situation, Beasley had interest from multiple other teams. Specifically, the Giants, Panthers, and Commanders have tried to sign him.

The Giants have been the most persistent, we’re told. But the offers have been at or near the league minimum. Beasley, who has earned nearly $50 million in his career, doesn’t need to play for whatever he can get.

Per Mike Florio of NBA Sports

The New York Giants are trying to work around a tight financial situation:

Unfortunately, the Giants don’t have much salary space to work with, which is why they likely offered Beasley a minimum contract. Big Blue has $5.16 million available, so they could offer him a bit of money for the rest of the season, which would reset in 2023, clearing any salary cap applications.

Beasley played in 16 games last season with the Buffalo Bills, recording 693 yards and one touchdown, but he’s been a reliable target for Josh Allen over the past few seasons. Starting his career with Dallas, playing with them across seven seasons, he spent three years with Buffalo before waiting for his latest opportunity with the Buccaneers.

Cole Beasley makes sense if the Giants can afford him:

With the Giants having a thin receiver core, they could use a bit of veteran experience, so if Beasley ends up falling out of favor with the Buccaneers, I wouldn’t be surprised if he joined Big Blue the rest of the way in a few weeks. He would seamlessly fit into an offense that is very familiar under Daboll’s leadership.