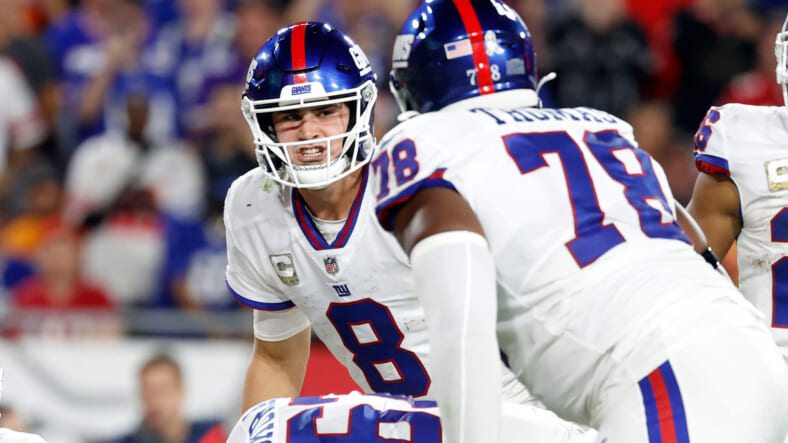 The New York Giants emerged victorious in Week 7 against the Jacksonville Jaguars, courtesy of a potent running game featuring Daniel Jones and Saquon Barkley. However, their success on the ground wouldn’t be possible without the impact of left tackle Andrew Thomas, who put together yet another elite performance against a solid Jaguars defensive front.

Thomas entered the game as one of the best offensive linemen in football, further solidifying his claim that he’s arguably the best-left tackle in the game. Entering Week 7, Thomas still hadn’t given up a sack and had allowed just one quarterback hit. Fortunately, he kept those two statistical variables clean once again up against Jacksonville, allowing just one quarterback hurry across 43 pass-blocking snaps.

In fact, he posted his second-highest pass-blocking grade across seven weeks with an 83.9, according to PFF. His best all-around game was against the Chicago Bears in Week 4, when he refused to give up a single pressure against Robert Quinn, an above-average pass rusher by most accounts.

The New York Giants have Andrew Thomas locked up for the next two seasons:

Fortunately, Big Blue has Thomas under contract until the 2024 season, entering his fourth year in 2023 with an expected fifth-year option acceptance. This gives the Giants plenty of time to utilize his talents at a cost-controlled price point, given he’s on his rookie deal.

His projected fifth-year salary is just under $14 million, a great price point given the massive contract extension he will get if he continues to play at this level and remain healthy. There is concern that he might be dealing with a chronic left ankle issue, but he’s playing through the pain and managing things at an extremely high level.

Nonetheless, the Giants have themselves a bookend left tackle who is doing a phenomenal job protecting Daniel Jones and giving him the necessary time to develop. That factor alone has helped the Giants’ quarterback take tremendous steps with his personal growth and development.