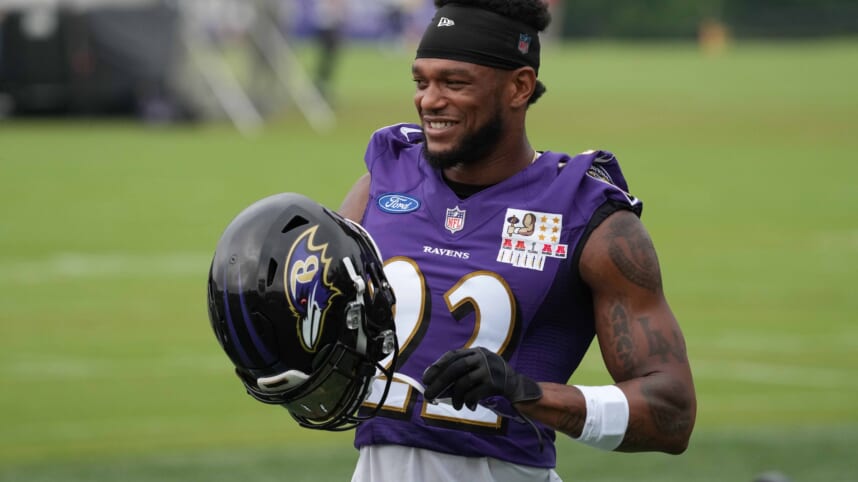 The New York Giants don’t have much depth at the cornerback position, but they also don’t have the available funds to target a free agent option that can help smooth over CB2.

Big Blue currently has $5.35 million in available salary space, not enough to sign a legitimate player and carry a bit of flexibility into the season. However, the expectation is that they will release Darius Slayton, saving the team about $2.5 million in cap space.

What would the New York Giants be getting in Jimmy Smith?

With that added money, the Giants could consider former Baltimore Ravens corner Jimmy Smith, who is currently a free agent. At 34 years old, Smith is undoubtedly at the back end of his career, but he could provide plenty of value alongside Robinson. Smith already knows the defensive system that Wink Martindale is installing, a heavy man coverage-based strategy that forces cornerbacks to survive on an island.

Smith played in 293 total snaps last year, including 188 in coverage. He gave up 80 yards with two pass breakups. The Giants clearly are looking to give younger players reps during the preseason, but since Smith already knows the system, having played in Baltimore since 2011, they can easily snatch him off the streets and plug him in if need be.

Smith has enjoyed some quality years in the NFL, playing 601 total snaps in 2017 with an 84.1 coverage grade, per PFF. He gave up 292 yards and recorded three interceptions with six pass breakups.

Throughout his career, Smith has been a reliable corner but has dealt with injuries. At the very least, he can push Robinson and maybe teach him a thing or two about surviving in Martindale’s aggressive scheme.

Given his age, Smith would likely be a cheap signing but a valuable one.