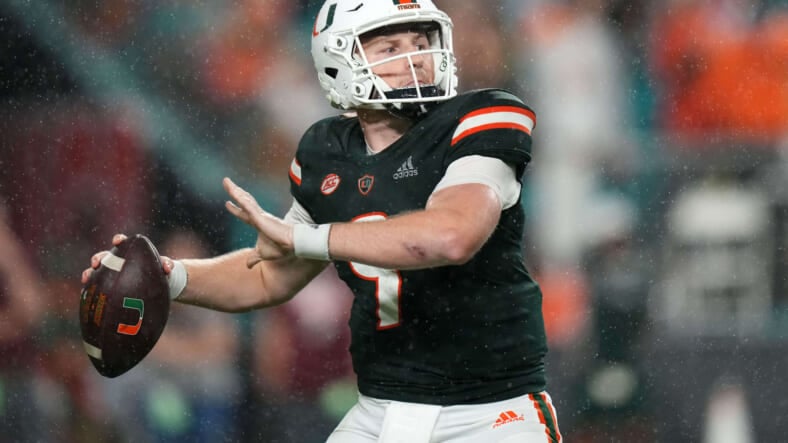 New York Giants quarterback Daniel Jones needs to have a phenomenal 2022 season to justify a contract extension from management. Jones has struggled to piece together a successful season after an optimistic rookie campaign back in 2019.

In 2021, Jones tossed just 10 touchdowns, collecting seven interceptions. While his completion percentage improved to 64.3%, he had a career-low 2,428 passing yards thanks to an inept offense led by Jason Garrett.

The 2023 NFL Draft presents a great opportunity for the Giants to land a quarterback if Jones doesn’t pan out. There are a few high-profile options to choose from.

The Giants selected an interesting quarterback option in a 2023 NFL mock draft by ESPN:

The new Giants regime didn’t draft Daniel Jones in the top 10 in 2019 and declined his fifth-year option, which means he’s likely in his final season in New York. That puts the Giants back in the quarterback market.

The 6-foot-4 Van Dyke flashed in nine starts last season (25 touchdown passes, six interceptions), and he could be even better in 2022 because of the staff and roster new coach Mario Cristobal has assembled. Van Dyke has the arm strength and mobility to become a star.

The Giants would be settling with Van Dyke, who is probably the 4th best QB in the class:

The Giants went with Tyler Van Dyke out of Miami as their quarterback of choice. At 6’4″ and 224 pounds, Van Dyke threw for 2,931 yards last season, including 25 touchdowns and six interceptions. Overall, his season wasn’t anything special, but he has impeccable arm strength as a primary pocket passer.

Looking at the quarterbacks that Brian Daboll and Mike Kafka worked with respectively in Buffalo and Kansas City, Van Dyke might not fit the mold. Josh Allen and Patrick Mahomes not only have unbelievable arm talent but great athleticism to pair with it. Van Dyke seems to be more of a pocket passer who lacks the athleticism modern quarterbacks are starting to contain.

The best-case scenario would be Bryce Young or CJ Stroud out of Ohio State, but the Giants would have to be a terrible football team once again to land a top-five pick. Otherwise, they can sell the farm in hopes of moving up high enough to acquire their quarterback of choice.