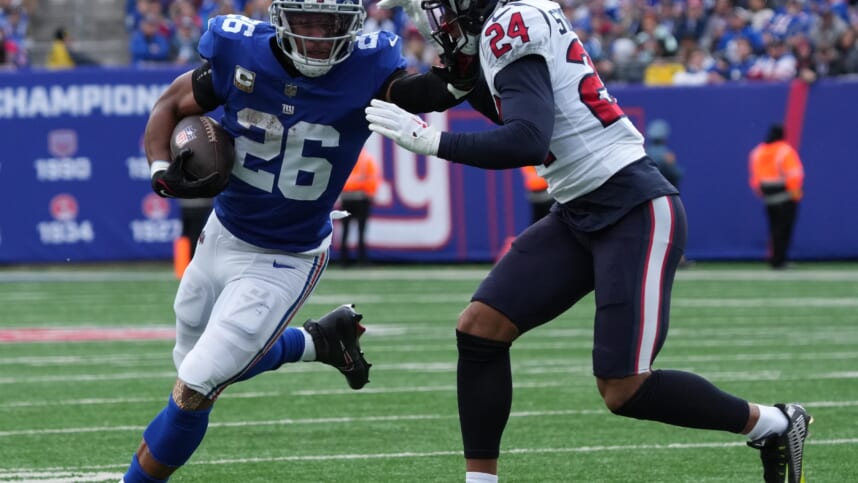 With the recent bye week for the New York Giants, Joe Schoen was hard at work when it came to negotiating contract extensions with upcoming free agents.

Obviously, no free agent after the season for the Giants is any bigger than Saquon Barkley. Reportedly, the Giants and Barkley were “not close” toward coming to an agreement on a multiyear extension.

On how the beginning of contract talks went, Barkley stated the following.

“We got into a little bit of a conversation… At the end of the day, I put that in the past. That was the bye week. Obviously, we weren’t able to come to an agreement during the bye week and my mindset is just focus on the rest of the season. Next week going against Detroit and knowing when that opportunity comes up again, focus on it then.”

Barkley did say he was just “happy” that they were able to have a conversation. He said, “I know how they feel about me. They spoke very highly of me, but like I said, we weren’t able to get anything done during the bye week and I agree with Joe, just lock it up and worry for the rest of the season and make sure no distractions come of it.”

At the end of the day, Barkley did state what every Giants fan wants to hear.

“I think I’ve kind of been vocal before contracts were even brought up, about how I feel about this place. What I want my legacy to be in this place and I want to be a Giant for life… Like I said, I’ve been vocal about that so if the conversation gets brought up again, we’ll go from there.”

Barkley propelled the Giants to their seventh victory in nine games yesterday. He was given a full workload that consisted of a whopping 35 rushing attempts, he totaled 152 yards rushing (4.3 per attempt) and a touchdown. Barkley now has 931 rushing yards and 1,128 from scrimmage. He is well on his way to a big payday.