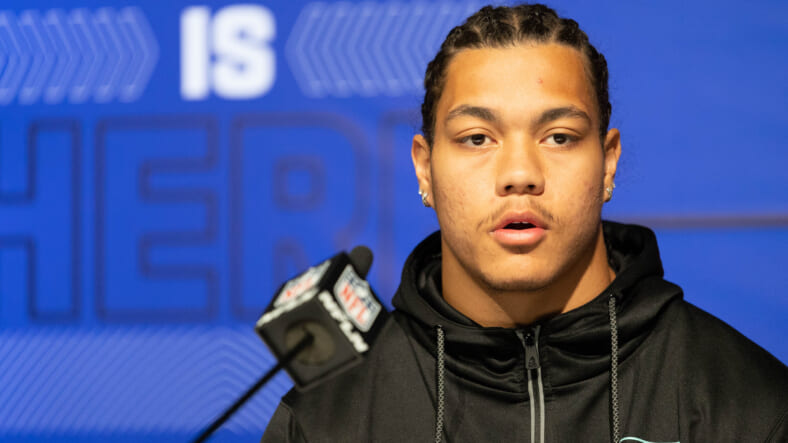 The New York Giants received some disappointing news today at training camp. Rookie safety Dane Belton did not participate in practice as he wore a sling around his left arm. According to Jordan Raanan of ESPN, the reason for the sling is a broken collarbone. Dane Belton will miss time a significant amount of time with this injury.

Dane Belton was the 114th overall pick in the 2022 NFL Draft. Belton was “making a strong impression” during the first practices of training camp. There is still “hope” that Belton will be ready to return to the field “for the start of the season,” however, that seems to be an optimistic outlook. David J. Chao, also known as ProFootballDoc on Twitter, has a less optimistic outlook on Belton’s injury. Chao projects an eight-week recovery time and said Belton “seems to be an ideal IR and come off Week 4.”

What Dane Belton’s injury means for the Giants

Dane Belton’s broken collarbone puts a wrench in the Giants’ plans. There was a lot of excitement surrounding the Giants’ fourth-round rookie. Belton was a playmaker in college, nabbing 5 interceptions for Iowa in 2021. He also recorded 46 tackles, seven passes defended, and three tackles for loss. The Giants were expected to get Belton heavily involved with the game plan in nickel and dime packages.

Dane Belton is a dynamic defensive playmaker that the Giants will want to see make a return to the field as soon as possible. The hope was to develop his talents through the preseason, but that seems impossible now. When Belton is ready to make his return, though, Wink Martindale will have a fun time incorporating him into the Giants’ new fast-paced, blitz-heavy defense.

This injury could lead to increased playing time for some of the Giants’ depth pieces in the secondary. Expect to see the likes of Yusuf Corker and Andrew Adams more frequently in camp. The New York Giants were already thin at safety and this injury only adds to the depth chart worries.