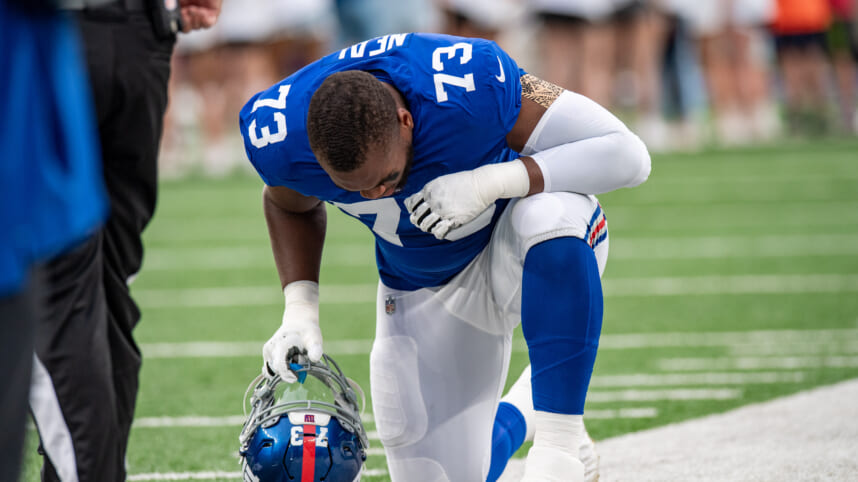 The New York Giants are expecting big things out of rookie offensive tackle Evan Neal, who’s already slotted in as the starting right tackle. In the first preseason game of the season against the New England Patriots, Neal was labeled as “top-heavy” and showcased a bit of imbalance in his game.

However, many began hating on Neal after one performance, the first ever of his NFL career. The former Alabama stand-out understands he has a long way to go with his development but knows that he belongs in the league.

“At the end of the day, I’m definitely not a finished product, but I’m getting better and better every day,’’ Neal said. “I belong here, I belong in this league. I’m going to win reps, I’m going to lose reps. That’s all a part of it. The preseason games and everything and so forth are just extra experiences that I’m going to get under my belt and I’m going to learn from all those mistakes and learn from the things that I need to get better at.’’

One week later, against the Cincinnati Bengals in the second preseason game, Evan looked dominant for the most part. He gave up one pressure on 25 pass-blocking snaps, showing solid technique. Speed rushers may give him more of a problem early in his career given his massive frame, but he has the power to anchor against bull-rushes and IQ to use his hands efficiently.

Neal’s biggest problem will be the quickness of his feet and mirroring faster edge rushers. Offensive line coach Bobby Johnson knows he has to trust his technique, which he executed far better against the Bengals.

“Making sure he’s got everything nice and tight, the way we teach it,’’ offensive line coach Bobby Johnson said.

While the critics came out in mass after the first preseason game, they’ve been rather quiet after a stellar outing against Cincinnati. If he can continue to build upon his early success, Neal should be ready for the regular season and the challenges that come with taking on first-team defenses.