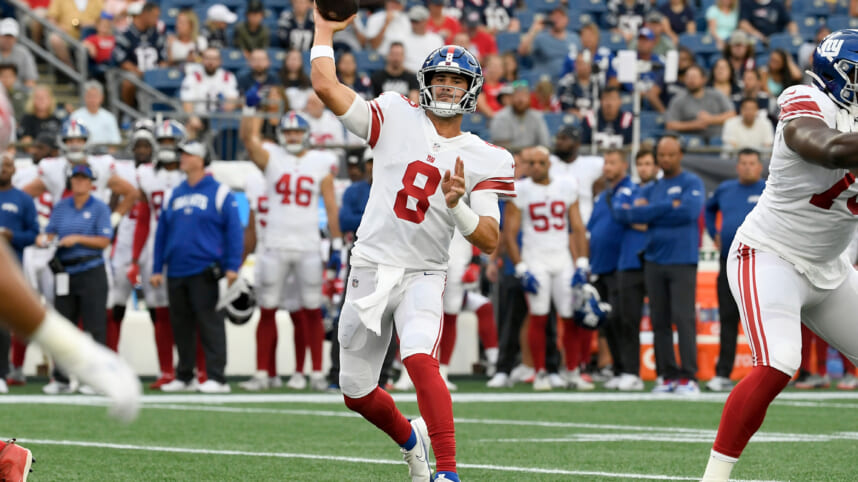 It is no surprise that New York Giants quarterback Daniel Jones is struggling to adapt to the team’s new offensive scheme. Hiring head coach Brian Daboll and new offensive coordinator Mike Kafka should provide a modern approach to an NFL offense, but Jones is coming from an outdated prehistoric scheme led by Jason Garrett.

The new system will rely heavily on pre-snap motion and gathering information so Jones can make the proper decisions post-snap.

Jones has a long way to go, though, having tallied 2,428 yards and 10 touchdowns last season, the lowest numbers in his career. While his completion percentage has gradually increased, primarily as a result of short route concepts and hot reads, Jones has taken big steps backward by most accounts.

In fact, his unreliability and lack of proven production resulted in new management declining his fifth-year option, giving him just one more season to prove his worth in front of the Giants brass.

Jones isn’t taking the rejection of his fifth-year option too hard, knowing that new management doesn’t know him any loyalty after three years of uninspiring play.

“You can’t think about it too much, you can’t worry about it. Coming in, understanding that there’s going to be a lot of change this year, there’s new people that I haven’t had the chance to be around, work with, and go through a season with. That was a piece of it. In a lot of ways you’re starting over … doing everything I can to put the team in position to win games, and letting the rest take care of itself.”

The New York Giants have a long journey ahead:

Jones is doing everything in his power to prepare for the 2022 regular season, but with a brand new offensive line and several playmakers who have dealt with injuries the past few seasons, there is no guarantee things will go as smoothly as expected.

In fact, the consensus is that the cards are stacked against DJ in the first year of a new system with fresh faces surrounding his development. There are cases where teams can turn things around in one off-season, but a good parallel is the New York Jets, who are entering the second year of a rebuild and still don’t know what they have in Zach Wilson.

The Giants are realistically at least two years away from making a legitimate push for a playoff spot. Jones understands that wins are the only thing that matters at this point in time. His career has been full of losses, courtesy of constant negative factors. He faces his most daunting challenge yet. He now has the support behind him to extract his best version after showing flashes of promise as a rookie in Pat Shurmur’s offense.