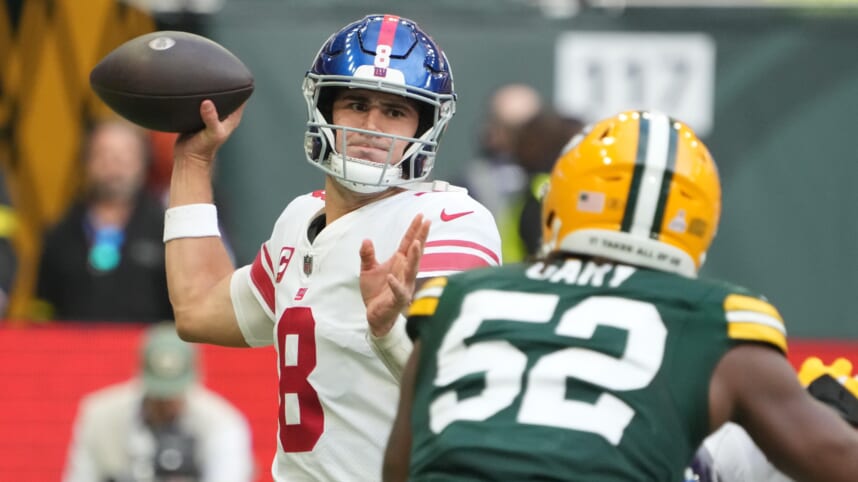 Utilizing grit, chemistry, and phenomenal execution, the New York Giants secured their 4th win of the season on Sunday morning against the Green Bay Packers in London. Entering the game, the NFL had the Giants ranked as the 19th-best team in football with the Packers ranked 4th.

Overcoming Green Bay and future Hall of Fame quarterback Aaron Rodgers was a massive accomplishment for the Giants, especially since the team was decimated by injury.

Starting the contest with Darius Slayton, Richie James, David Sills, and Marcus Johnson as the team’s primary receivers, nobody expected that Daniel Jones would finish the game completing 21 of 27 passes for 217 yards. In fact, the expectation was that running back Saquon Barkley would be the star of the show, and he did total over 100 all-purpose yards and a touchdown.

However, one of the biggest catalysts for the Giants over the past two weeks has been turnover-free football. Specifically, Daniel Jones has erased the narrative that he is careless with the football in his hands, after fumbling 19 times during his rookie season and 10 times during his sophomore campaign. In 2021, he fumbled seven times but has been extremely careful with the ball this year, fumbling once and throwing two interceptions, one of which was due to a receiver slipping.

In fact, Jones hasn’t turned the ball over in two games, beating Chicago and Green Bay with his legs and arm. Jones only has three touchdown passes this season, but he also has two scores on the ground, protecting the football much more effectively.

Better decision-making from DJ has been an important variable in the Giants’ strategy lately. One specific play during Sunday’s win over the Packers stood out. With the Giants on the doorstep of Green Bay‘s end zone, Daniel Jones rolled out to the right side looking for a receiver on 1st and goal but decided to launch the ball into the stands instead of risk a potential turnover.

That was a decision that Jones wouldn’t have made in the past, trying to fit the ball into a tight window and risk flipping the momentum. Small decisions like that stand out for a quarterback, and it seems as if Jones is taking to the coaching quite well.

Fantastic coaching from head coach Brian Daboll and coordinator Mike Kafka has completely turned Jones around with his development and growth. The last two years under the leadership of Jason Garrett set him back significantly, but the dark days are behind him and fans are once again looking toward a bright future that may end up including Jones if he can compound his success.