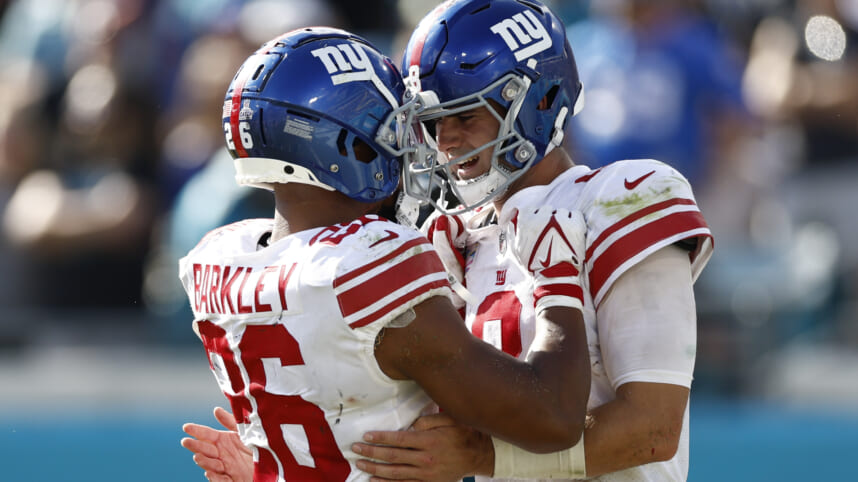 New York Giants quarterback Daniel Jones has taken the proper steps in the right direction to justify extending him beyond the 2022 season. New general manager Joe Schoen elected to reject his fifth-year option, putting the ball in Jones’s court.

Through 10 weeks, Jones has alleviated some of the concerns that put him on the roster bubble heading into this year, but he still has a long way to go before he establishes himself as a franchise quarterback.

Over 157 completions, Jones has accrued 1,596 yards through the air, eight touchdown passes, and two interceptions. On the ground, he’s rushed for 387 yards and three scores, well on his way to breaking his personal best in both categories on the ground.

Simply put, the Giants have won games with Jones under center, proving that he’s capable of leading the team. Eliminating his processing mistakes end risky nature has put him in a good spot in terms of his development. Jones himself believes that he has improved week over week, providing a self-assessment at this point in the season.

“I think I’ve improved week to week,” Jones said Wednesday. “I think I probably am playing better than I have in years past, but that’s the goal, to improve every year.”

Making good decisions is essential, especially in the red zone, where Jones was prone to turning the ball over in the past.

“(I need to) continue to make good decisions, and when we have opportunities to make plays in the pass game, we do it,” Jones said.

The New York Giants are using an elite running game to propel the offense:

Head coach Brian Daboll has instrumented a premier running game this season, relying heavily on Saquon Barkley to handle the bulk of the workload. The 25-year-old running back has tallied 931 yards on the ground this season, good for 103.4 per game. Barkley is in a contract year, and given the team’s reliance on his capabilities, extending him seems like a necessity.

“We’ve won in different ways this year, and depending on what the defense is doing, depending on how the game’s going, we’ll adjust our style,” Jones said. “I think we’re always trying to score as many points as we can. Every time we get the ball we’re trying to put it in the end zone. That doesn’t change week to week, based on who we’re playing.

The Giants run plenty of play-action and bootleg concepts to manufacture time in the pocket and keep defenses focused on Barkley around the line of scrimmage. This has opened up the passing game a bit for Jones, but at some point, he’s going to have to prove his worth in the pocket as a traditional quarterback. The Giants’ current offensive scheme isn’t a sustainable one, needing more support at the wide receiver position and better protection up front.

Nonetheless, Schoen did as much as he could with his financial limiations this past off-season, but the Giants are prepared to have a bit more cash flow next off-season, meaning they could make substantial upgrades across the board.