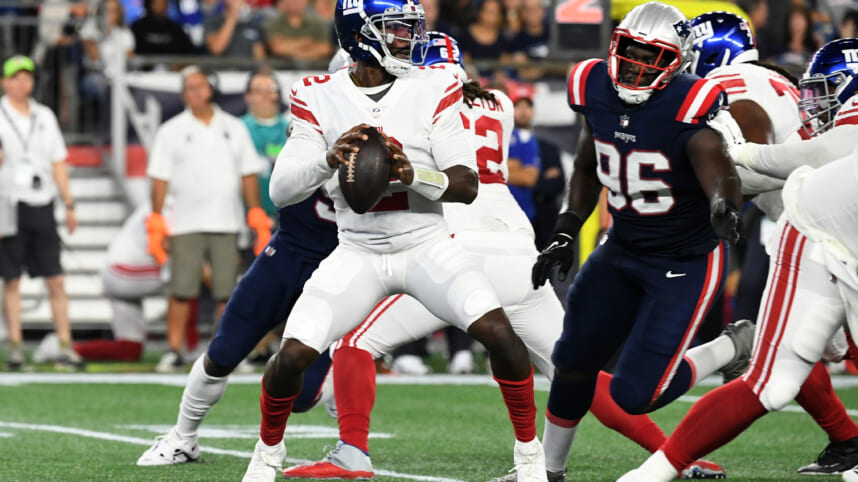 New York Giants head coach Brian Daboll has 100% confidence in quarterback Daniel Jones, meaning he’s penciled in as the QB1 ahead of the 2022 regular season. However, that won’t stop the Giants from giving back up Tyrod Taylor starting team snaps during the preseason in case he needed to step in for whatever reason.

Jones has been underwhelming during training camp, but most of the scenarios he’s found himself in are constructed to test him and present adversity. Overcoming challenges in practice is how you prepare for live action. The Giants still want to have a prepared insurance policy in Tyrod in case of injury or deficient play.

Having a competent backup QB is important for the New York Giants:

Taylor is a true and tried NFL quarterback, having played 11 years as a professional. In fact, he was the penciled-in starter for the Buffalo Bills for three consecutive seasons, earning a Pro Bowl nod back in 2015. He threw for over 3,000 yards with 20 touchdowns and six interceptions. At the very least, he presents a massive upgrade over Mike Glennon, who was incapable as a quarterback last season with the Giants.

In fact, Tyrod was the expected starter for the Houston Texans in 2021 before suffering an injury. He almost reached 1,000 yards passing in six games with five touchdowns.

Considering Daniel Jones has missed time due to injury in the past, notably a neck issue he suffered against the Philadelphia Eagles last year, having a competent backup was always a priority for Daboll and new general manager, Joe Schoen.

It is important to note that Tyrod earning first-team reps has no implications on Jones’s status as the top gun. However, Daboll did mention that they will play the best player available, and if Jones is struggling, who is to say management won’t consider a mid-season swap?