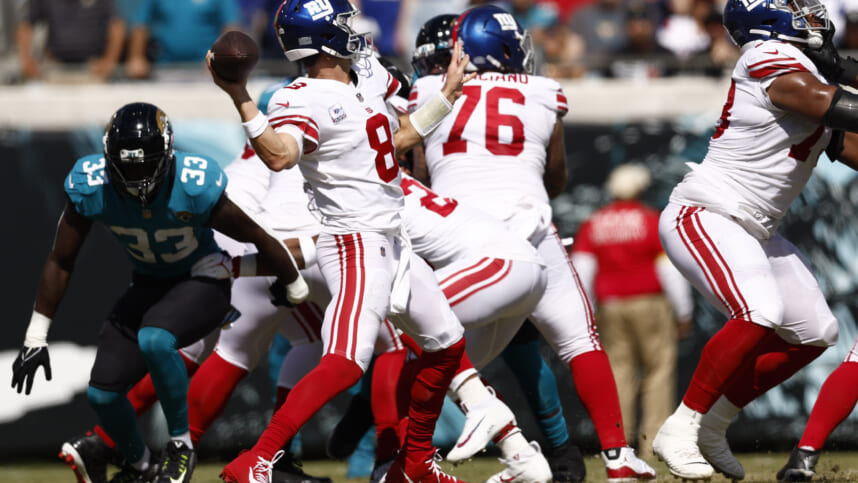 The New York Giants are preparing to replace two starters on the offensive line in Week 8 against the Seattle Seahawks. They lost both Ben Bredeson to a knee injury and Evan Neal to an MCL sprain against Jacksonville, despite managing to pull out the win courtesy of Daniel Jones and Saquon Barkley.

However, the loss in consistency is a significant blow for the Giants, who were getting solid value out of Bredeson and witnessing great improvement from Evan Neal.

Neal had experienced vast improvements in pass-blocking the last two weeks, giving up three total pressures before going down.

Bredeson had put together arguably the best game of his career against Baltimore in Week 6, having not given up a single pressure in his last two games at left guard. Losing him is a significant blow, but the Giants are confident in rookie Josh Ezeudu out of UNC.

The biggest change for the Giants is undoubtedly at right tackle, with Tyre Phillips, a former third-round pick out of Baltimore, taking over for Evan Neal. Phillips has 950 total snaps in his career, with 605 coming at RT.

Over 57 snaps against Jacksonville, he gave up four pressures. He spent the first two years of his career with Baltimore, so he has some familiarity with defensive coordinator Wink Martindale, who routinely saw him practice.

Historically, Phillip has been a bit more efficient as a pass protector than a run blocker, so expect the Giants to utilize the left side of their offensive line heavily, especially since Ezeudu is a far more potent run blocker than pass protector at this point in his career.

Seattle has an underrated pass rush, especially from the interior, so the Giants will need to utilize their creativity once again to produce points. Notably, Seattle has a weak run defense but solid pass coverage unit, so expect to see plenty of play-action, bootleg, and a heavy dose of Saquon Barkley in Week 8.