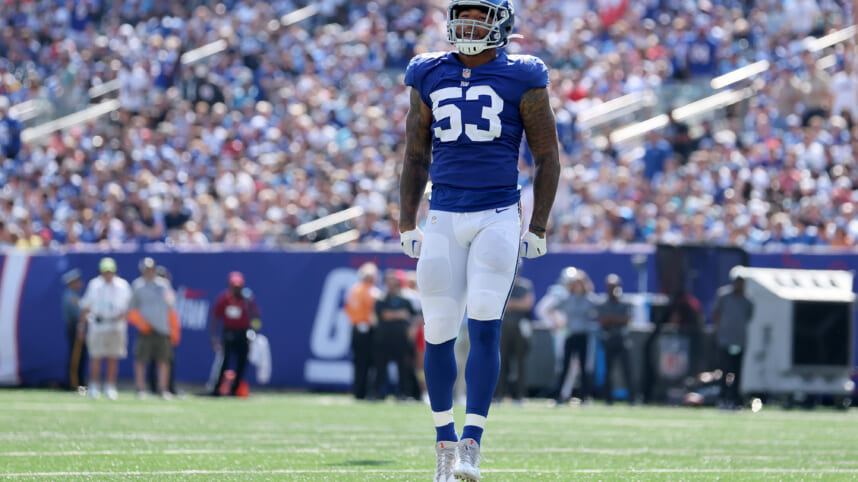 The New York Giants are gearing up to take on the Houston Texans in Week 10 following their BYE week. Having sustained a significant injury in an ATV accident, the Giants won’t have Xavier McKinney at their disposal in the secondary, but they will be getting a few reinforcements back to help the defense.

Notably, Big Blue expects to get back pass rusher Oshane Ximines, who’s been dealing with a quad injury. After being a fringe roster player over the summer, he started his 2022 season on a high note.

Ximines was originally drafted by Dave Gettleman back in 2019 out of Old Dominion. The former third-round pick never lived up to expectations, but he helped supplement the loss of Kayvon Thibodeaux and Azeez Ojulari early in the year alongside Jihad Ward.

The New York Giants have gotten solid value out of Oshane Ximines:

In fact, Ximines put together nine total pressures over his first four games, with seven in his first three games against Tennessee, Carolina, and Dallas. On the year, he’s played in 189 defensive snaps, accruing 10 pressures, two sacks, four quarterback hits, and four hurries.

Clearly, the 25-year-old pass rusher has hit his stride under the leadership of new defensive coordinator, Wink Martindale. Martindale relies heavily on his edge setters to stop the run and get after the quarterback. The aggressive style produces plenty of 1v1 situations for pass rushers, something that Oshane has extrapolated on this season after barely playing in 2021.

Coming off the BYE and Ojulari still nursing a calf injury, the Giants could use the support on the defensive front, especially with the loss of McKinney in the defensive backfield. The Giants would like to stop opposing quarterbacks from throwing downfield, meaning players like Ximines need to step up and put pressure on the quarterback to force mistakes and short-route concepts.

Nonetheless, it’s exciting to see a myriad of Giants defenders playing up to their potential this season under new leadership. They’ve hit a strive and deserve ample recognition for their efforts.