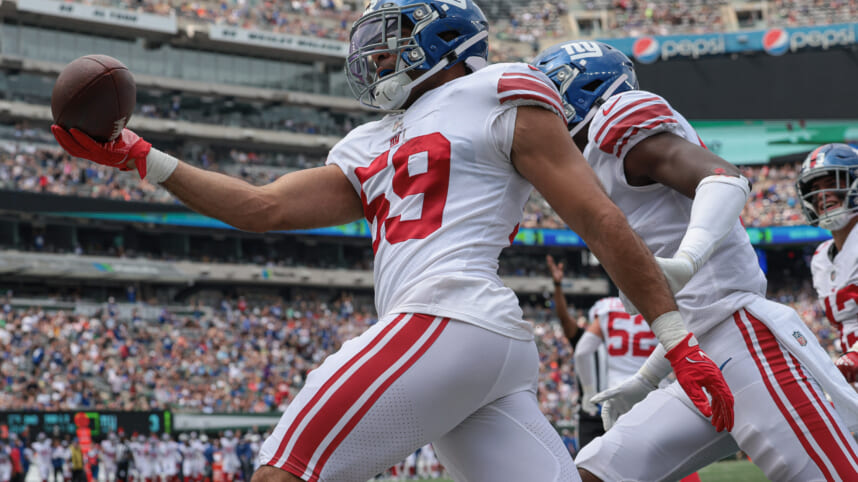 After the New York Giants and linebacker Blake Martinez mutually parted ways, another hole opened up on the defensive side. With needs at cornerback, the Giants utilized most of their waiver wire claims to acquire more secondary help.

However, they may need to focus on linebacker as well, especially after rookie LB Darrian Beavers suffered a torn ACL in Week 2 of the preseason.

Currently, on the roster, the Giants have Tae Crowder, Micah McFadden, and Austin Calitro expected to earn starting snaps. Calitro is an interesting player, though, having been signed to the San Francisco 49ers as an undrafted free agent back in 2017. He has five years of NFL experience, but this off-season has presented him with a great opportunity to secure starting snaps.

Calitro spoke about the impression he got when he joined the Giants this off-season, immediately noticing the culture they are actively building.

“The first thing that I noticed when I walked in my first week here was how close the locker room was, and I think first and foremost if you have a culture and a close locker room if everything else goes bad that’s something you can fall back on. Something they had in Cincinnati is they had a bunch of young talented players and we have that here too,” he said.

The coaching staff is communicating well with the players, which is something the Giants have struggled with over the past few seasons under the leadership of Joe Judge.

“Speaking of the coaches, I think everyone is pretty much in sync coach-wise, and front office-wise, and (Brian Daboll) does a great job telling everyone what he expects, and he holds that to us. That’s the start of a great team in my opinion. I wasn’t there for the entire turnaround, but like I said, when I went back you can tell they didn’t skip a beat. (Bengals head coach) Zac Taylor still had his expectations, and Dabes is the same kind of guy — he has his expectations and you’ve got to meet them.”

What is Austin Calitro bringing to the New York Giants?

Lucky for Calitro, the Giants have a relatively weak and undeveloped team in the first year of a rebuild. This is likely the best opportunity he will ever have at landing starting snaps and taking on a more prominent role.

However, the former Villanova Wildcat also contributed two interceptions, one of them being a pick-6 against Joe Flacco and the Jets’ first-team offense.

Altogether, he showcased fantastic coverage abilities from the linebacker spot, portraying solid vision and the ability to undercut throws in the flat. He also scooped up a forced fumble from Micah McFadden on Jets’ starting running back, Michael Carter.

Calitro’s showing this off-season has earned him an opportunity on the 53-man roster, but he still has a long way to go to convince the coaching staff he can serve as an every week player that makes an impact in a positive way. A tough Week 1 opponent in the Tennessee Titans and Derrick Henry should offer more answers.