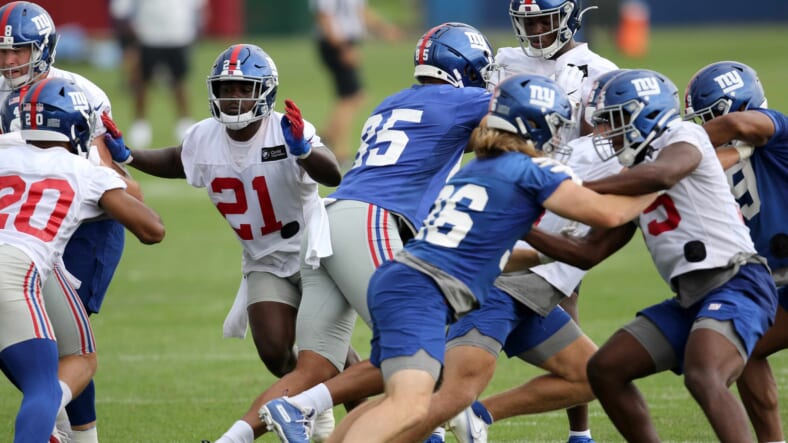 The New York Giants re-tooled their offense this off-season, acquiring Kenny Golladay in free agency and Kadarius Toney in the first round with the 20th overall pick. Golladay, a big 6’4″ possession receiver, offers Daniel Jones a great security blanket in the passing game and downfield threat. The offense last season stuck to a more West Coast-style scheme, dinking and dunking for short yardage rather than targeting receivers downfield seeking chunk plays.

Ultimately, the scheme must adapt, taking risks downfield and applying Jonesâ€™s arm strength. However, Jones and the offense have looked outmatched thus far during training camp compared to the defense, which is expected to be a top 10 unit this year once again.

The defense was one of the more surprising factors during the 2020 season, showcasing a unique blend of zone coverage and blitz packages. Coordinator Patrick Graham is set to return to his roots, a man-coverage-based game that relies heavily on the pass rush. That is a primary reason why the Giants allocated assets toward drafting Azeez Ojulari, Elerson Smith, and signing several options like Ifeadi Odengibo and Ryan Anderson.

The defense always had the upper hand for the New York Giants starting camp:

The offense was always going to be outmatched early in camp, as Jones missed several passes on Friday, including a short dump off to Devontae Booker and throwing an interception to Logan Ryan on a fade route to Evan Engram in the end zone.

The Giants’ secondary has been working all off-season together in Tampa Bay, simply transitioning over to the Quest Diagnostic Center for training camp. Their chemistry continues to grow, and it is showing off against Jones and the offense, who’ve had two consecutive tough practices, littered with drops and mistakes.

However, with so many new pieces on offense and new coaches, it will take time for the unit to gain their sea legs. Making assumptions and justifications just three days into camp is a bit overzealous, but if the unit continues to struggle a few weeks down the road, then concerns will have some legs.

Both Jones and Golladay have spent time after practice refining their chemistry and building their timing. After Fridayâ€™s practice, Golladay stated that itâ€™s all about “getting the chemistry down like clockwork.” Nonetheless, heâ€™s had a tough time facing off against top corner James Bradberry, but it is important to remember that Kenny missed the majority of the 2020 season and is still working his way back to football form.