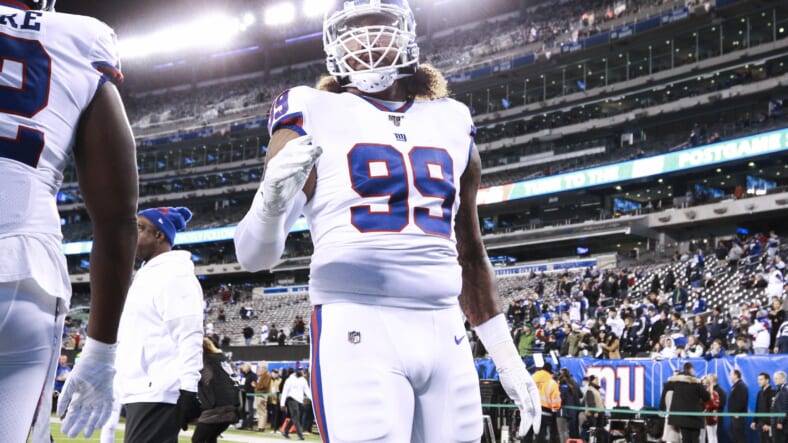 The New York Giants won’t just be letting Eli Manning walk this upcoming offseason, but they will also be leaving his $23.2 million cap-hit behind. The money gained in free agency will give general manager Dave Gettleman a ton of cap space to work with in free agency.

A decent portion of the gained cap will likely go toward interior defensive lineman Leonard Williams, who’s in line to earn a nice contract from the Giants. He could make as much as $14 million per-season, and Gettleman has put himself in a spot where he needs to extend him. His leverage is minimal, especially after giving up multiple picks for the former Jets services.

There’s always the idea that Manning could be extended, but I would bet big money that he retires once this season comes to an end. Daniel Jones is in place, the Giants need to invest heavily in the defense and offensive line, and Gettleman is running out of time to prove he was the right hire.

Finding a suitable right tackle is a priority for Gettleman, who filled the position with Mike Remmers, a familiar face for head coach, Pat Shurmur. Remmers has been average at best during 2019, but they also have Nick Gates who played a solid game against the Jets last weekend. Seeing of Gates should be a priority for Shurmur moving forward, considering his minimal cap hit as an undrafted free agent in 2018.

If Gates can emerge as a capable starter at right tackle, the center position will be a priority, and finding a potential replacement for Nate Solder is necessary. Andrew Thomas of Georgia would fit the bill perfectly if Chase Young is already off the board for Big Blue.

At this rate, the New York Giants will land in the top-5 picks of the draft, and with a 2-8 record, settling in the top-3 is also possible. The closer they can get to Young, the better, as he’s one of the most athletically gifted pass-rushers college has seen in quite some time. Bringing him on to a porous defense would immediately improve the quality of the unit.

Dan Benton – Do Giants have one of NFL’s top young cores?

Alexander Wilson – Do the New York Giants have a No. 1 receiver in Darius Slayton?