Do the New York Giants have a No. 1 receiver in Darius Slayton? 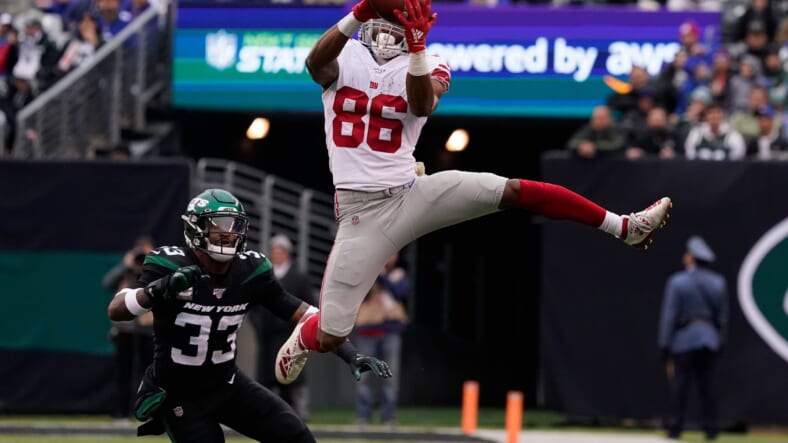 When the New York Giants drafted Auburn product, Darius Slayton, in the fifth-round of the 2019 NFL Draft, nobody expected him to be as effective as he’s been this season. Slayton began his career with Big Blue dropping passes at an astronomical rate, but he quickly alleviated that concern and shot up the depth chart.

Since his poor rookie training camp, Slayton has racked up 394 yards and five scores, putting out several impressive performances despite missing the first two weeks of the season. Slayton’s straight-away speed and growing route tree have made him a reliable option for rookie quarterback Daniel Jones.

The fifth-round pick reminds me of a Rueben Randle on steroids, but faster and better at running slant-routes.

If you were asked: Who leads the New York Giants in receiving touchdowns?

You might say, Evan Engram, Sterling Shepard, or Golden Tate. The reality is, Slayton is blowing them out of the water in the category with five. All of the Giants’ receivers serve a specific purpose – Engram can work in short-yardage to deep seam routes, Shepard is a consistent threat on third down and in the possession game, and Tate is best utilized in third-down situations and short crossing routes/WR screens.

After Slayton’s impressive week ten performance against the New York Jets, the idea of him being a No. 1 wide receiver bubbled to the surface. Logging 10 catches for 121 yards and two scores tells a story of dominance and efficiency. If he can continue to build his route tree and adopt more reliable hands, he can undoubtedly be an excellent pass-catcher for the Giants moving forward.

Even with Shepard and Engram in line to return in week 12 against the Chicago Bears, head coach Pat Shurmur will continue to look Slayton’s way in the passing game. Both Darius and Golden have been Jones’ top targets, and the developing chemistry will prove to be significant down the road.