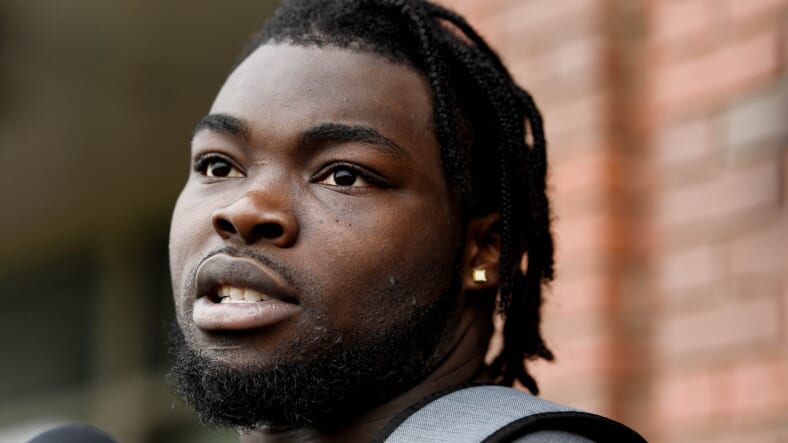 The New York Giants drafted a solid group of players in the 2019 NFL draft, but the late draft picks and UDFAs have really shined.

First, tight end CJ Conrad emerged as a quality athlete that slipped through the cracks and landed in the Giants’ lap. His influence so far has put Scott Simonson and Rhett Ellison’s jobs in question. George Asafo-Adjei, 7th round pick right tackle form Kentucky, though, has been another player of notice.

Coined “Big George,” the offensive lineman fits the bill perfectly in regards to general manager Dave Gettleman’s preferred “hog molly” look. At 6-5, 306-pounds, Asafo-Adjei represents a behemoth of a man on the right side of the line.

The New York Giants are approaching the RT position perfectly:

The Giants recently signed Mike Remmers to fill the spot while the late round player develops behind the scenes.

â€œHe picked up the offense much quicker than I thought he was going to,â€ Giants offensive line coach Hal Hunter said last month, according to NJ.com. â€œWhen you compare our offense to their offense, we have a lot more volume to it with a lot of the things that we were doing.â€

The athleticism and power Big George contains will help him in his quest for taking the right tackle job. Remmers was signed to a one-year deal which leaves the position wide open for the taking in 2020. If he can develop to a point where he can stand his ground against players like Lorenzo Carter, Markus Golden, and Oshane Ximines in practice, there’s reason to believe he could emerge as the starting option in the future.

Gaining a starting offensive lineman out of an undrafted player is certainly a steal, but there’s plenty of work to be done before we can consider him as such.