New York Giants: Kayvon Thibodeaux could not have a better mentor 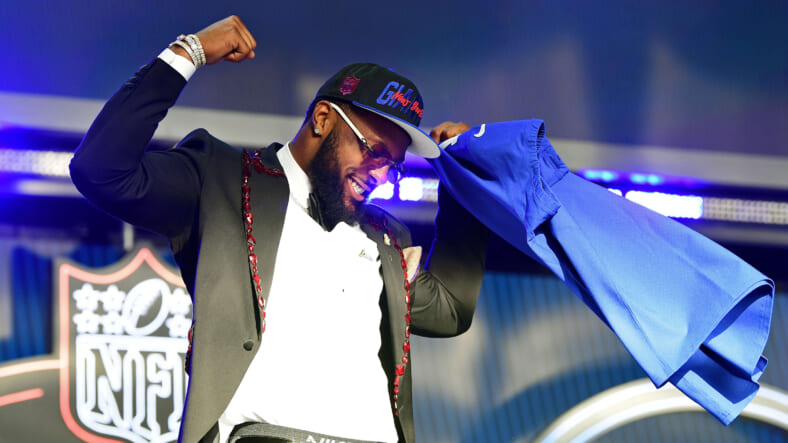 New York Giants fans are thrilled by their team’s 2022 NFL Draft class. With the fifth overall pick in the 2022 NFL Draft, the New York Giants drafted edge rusher, Kayvon Thibodeaux. Thibodeaux was looked at by many as the player in this year’s draft class with the highest potential and some felt like he could have been the first overall pick. The Giants followed this pick with right tackle Evan Neal, another spectacular selection at seven overall.

The Giants filled two huge positions of need with their first two picks. These were premium positions that the Giants filled with young, premiere prospects. Kayvon Thibodeaux is expected to be a star from day one. Expectations for Kayvon are high, but thankfully, he has the perfect mentor to help him reach astronomical heights: New York Giants Hall of Fame pass-rusher Michael Strahan.

Since his days at Oregon, Kayvon Thibodeaux has been mentored by a New York Giants legend. Michael Strahan “began mentoring the young edge rusher when Thibodeaux was still at Oregon, and has continued to guide the 22-year-old since he joined Big Blue,” according to Giants.com and other sources.

“He literally is one of my mentors, and he’s been talking to me throughout this process,” said Thibodeaux shortly after the Giants drafted him fifth overall on Thursday night. “He actually came to visit me when I was on my [prospect] visit with the team, so seeing him out there, that was really dope because he’s given me wisdom and he even was able to speak on my behalf because we have built a relationship over the year.” – Kayvon Thibodeaux on Michael Strahan

Kayvon Thibodeaux has set some extraordinarily high expectations for himself as a rookie. The Giants’ fifth overall pick is aiming to average a sack per game in his rookie season. Michael Strahan thinks that such a feat is possible:

“Seventeen, 18 sacks? I remember coming out of college and saying I wanted 10. He’s a little greedier than I am,” Strahan joked. “But I think with this kid, he could possibly do it with the position that he’s playing, with his athletic ability. And you know, [defensive coordinator] Wink Martindale. Wink just sends pressure, baby. Wink does not hold back.” – Michael Strahan on Kayvon Thibodeaux

Michael Strahan has been a transcendent star for decades. Strahan was not only a superstar on the field. He has also built himself an impressive multi-media career since his retirement from football. Michael Strahan knows how to handle fame. This is a skill he can teach to Kayvon Thibodeaux.

Kayvon Thibodeaux is excited to learn from Strahan how to be successful on and off the field, saying, “It’s really dope because he has literally walked in my footsteps and can show me the ropes on the field and off the field.”