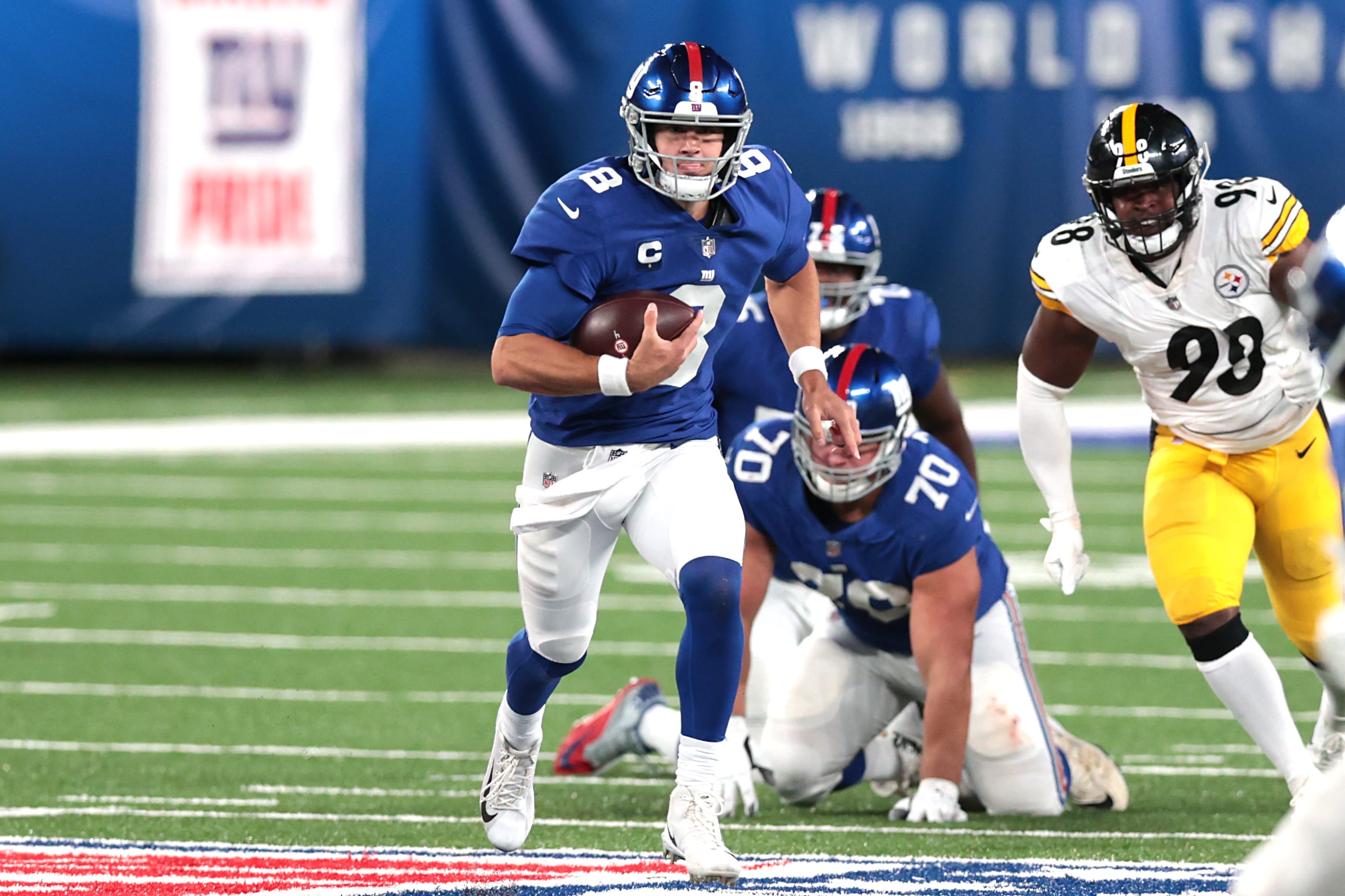 It’s hard to see an interview with a former New York Giants player this offseason that doesn’t bring up the question of Daniel Jones. Of course, it’s understandable why. Jones might be the most important variable for the Giants this year when it comes to taking a step forward. The success, or failure, of the offense may rest largely on his shoulders.

More than there was last season, there’s a bit of an optimistic feeling about Jones from many of the figures that have been asked about him. That includes Hall of Fame pass rusher Michael Strahan, who confirmed his belief in Daniel Jones as “that guy” for the Giants in an interview with USA Today.

“You know what? I love Daniel. As a person, absolutely. I think he has the perfect temperament, perfect everything for the position as a Giant. Physically? I’ll be honest with you, what an incredible athlete,” Strahan said when asked whether Jones could be the guy for the Giants.

The compliment about Jones’ physique is impressive coming from a player that spent his career at one of the most physical positions in the game. It’s not the kind of remark that’s often associated with Giants quarterbacks – but that’s changed with Jones coming in during the past two seasons and adding another dimension to the offense with his mobility.

“I think he could be that guy. He is the guy. Now I think you’re giving him what he needs, and I think Jason Garrett is going to do the right job setting himself up in this system so he could be successful and lead the drive to a Super Bowl, which I’m hoping is very soon,” Strahan would continue.

Giving Daniel Jones what he needs

As Strahan pointed out, the Giants have made plenty of additions to help Jones this offseason. From Kenny Golladay to Kyle Rudolph, Jones will have a number of new options and the passing offense won’t look like it did last year.

However, an interesting thing to note is Strahan bringing up Jason Garrett. Garrett was much maligned this season but it’s possible that he isn’t being talked about enough this offseason. Most of the focus has gone on Daniel Jones and Saquon Barkley for understandable reasons, but Garrett has a large role in whether those players succeed or fail.

For both players, a personal step forward might not matter that much if the Giants still run an uncreative offense and fail to take advantage of their full talent.

We’ll find out soon enough this season whether or not Garrett has adapted enough to avoid that pitfall, with his job potentially on the line right now. The Giants are trying their best to give Jones what he needs, but one thing that can’t be understated on that list of needs is better playcalling than last season.

There’s been a lot of holes in the New York Giants roster over recent years and one that’s existed notably for the past couple has been at the position of pass rusher. Whether it’s defensive end or outside linebacker, the Giants have hardly had a dominating figure at the position and have had to be satisfied by flashes from players like Markus Golden, who may not even be on the team this season.

For that reason, pass rusher is high on the list of positions the Giants may be looking to upgrade in this 2020 NFL Draft which is rapidly approaching. According to SNY, the Giants have a specific kind of player in mind to target – and they want someone that fits the mold of one specific great Giants player from the past: Michael Strahan.

One team source said the Giants are definitely looking for that “Michael Strahan-type player” who can change the approach of an opposing offense all by himself. But unless Young falls to them at 4, they’re skeptical that such a player exists in this year’s draft. They’d have to take a shot at a second-tier player on the second day, like Wisconsin’s Zack Baun, Notre Dame’s Julian Okwara, or Penn State’s Yetur Gross-Matos.

Chase Young, from Ohio State, is the most likely player to pan out like Strahan – but when the Giants picked up wins towards the end of the season, they fell out of a position to draft him. The Giants, if they want Young, will now have to rely on other teams passing on him for quarterbacks… Three times.

However, shifts in demand could see three quarterbacks taken with the first three picks, which would give the Giants a chance to take Young at four. Assuming they don’t trade down and acquire more picks, that is.

If Young is taken within the first three picks, it looks like the Giants are leaning towards going offensive line or trading down and taking Auburn defensive tackle Derrick Brown – the latter move being the more controversial one. Neither of those options, however, quite fills one of the largest needs for the Giants in 2020: pass rush. 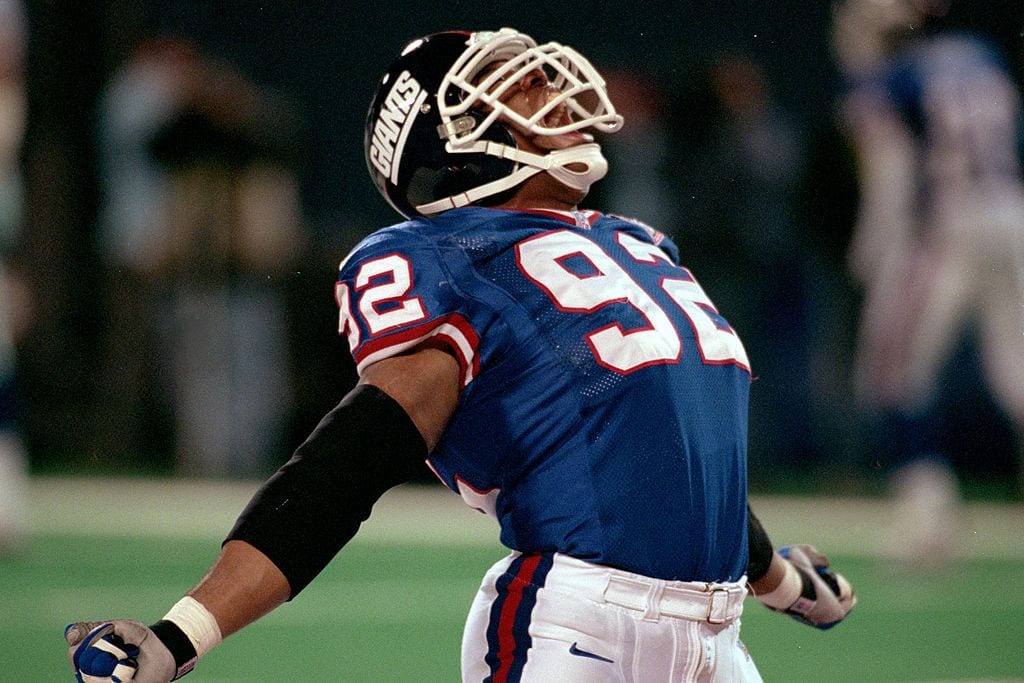 Anyone with a basic knowledge of football can tell you the New York Giants were in a state of peril during the 2019 season. The defense was putrid, the offense was stale, and the in-game coaching was some of the worst we’ve ever seen.

Former head coach Pat Shurmur is a talented offensive mind, but he was in over his head with the job that subsequently landed in Joe Judge’s lap, an option with no HC experience. However, the team already seems to be on a better path, with two former head coaches joining the coaching staff as offensive coordinator (Jason Garrett) and tight ends coach (Freddie Kitchens).

The New York Giants feel they are in good hands:

Rob Gronkowski: "Joe Judge is out of control. He's fun to be around, he has a lot of great jokes and is funny. He's a great coach for the Giants' organization. He loves the game of football to the max and knows the game inside and out."

The way forward starts with Judge evaluating the current players on the roster and grading them appropriately. That will give management an idea of what positions need significant draft/cap allocations this offseason.

One former Giants great that was willing to express his opinion on the state of the team is Michael Strahan, stating:

“Can’t have a bunch of nice guys and win. It doesn’t work. We need to find some dogs,” Strahan told The New York Times’ David Marchese in a Q&A.

“Defense is where I struggle, because there are times I’m watching, and I’m going, ‘Wow, this is pretty bad. We don’t have a playmaker, per se, on defense,’ and that’s been a little disheartening,” he said. “Where’s the guy who inspires everybody to play better?”

General manager Dave Gettleman brought in several veteran players in 2019 to help improve the leadership factor. Antoine Bethea, Alec Ogletree (was already on the team), and Markus Golden were all considered the leaders in the locker room and on the field. Nonetheless, the unit ranked 19th in the NFL in points allowed.

“Front-office wise, I don’t know what their plan is,” he said. “I mean, we got rid of Jackrabbit [Janoris Jenkins], trade [Damon] Snacks [Harrison], got rid of Odell Beckham Jr. We got rid of a lot of guys who were opinionated, but you’ve got to have a soul to your team.”

There are players and positions that Strahan complimented:

“All right, the things I like: Daniel Jones,” Strahan began. “Excited about Saquon Barkley. If we can get Evan Engram to stay healthy, he is a dynamic tight end. We need some work on the offensive line, and we need a big-play receiver, but offensively I feel good about the team.”

Michael is right, the offense is in a good place, starting with Daniel Jones. Barkley is a playmaker who can break games open, but health continued to be an issue for Evan Engram. If Gettleman can piece together the offensive line this offseason, they will be in a far better spot in 2020.

The demise of the team lands on the defense, who need bolstering at the highest level. Expect the Giants to allocate plenty of capital towards a pass rusher, linebacker, cornerback, and free safety. 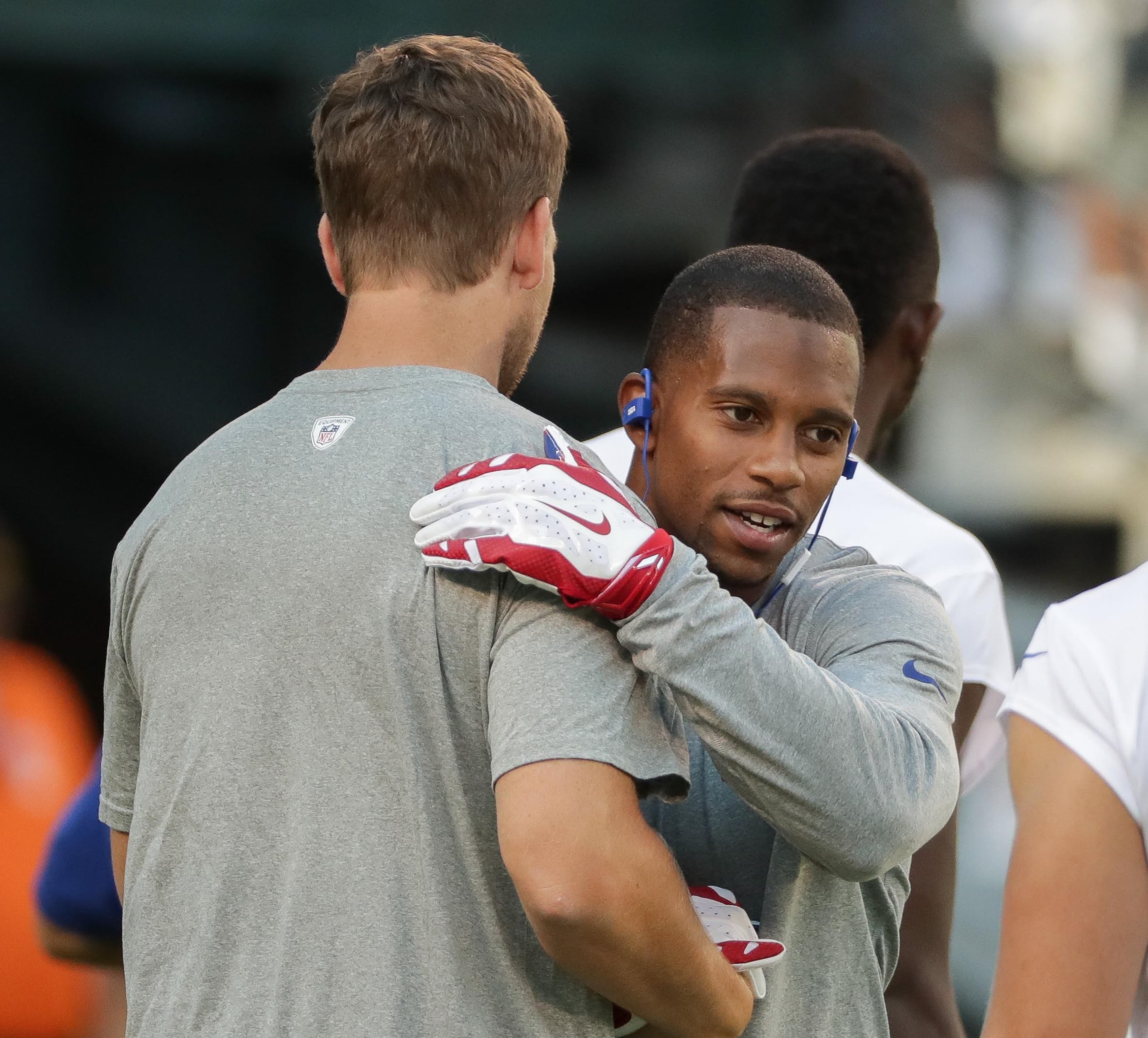 Throughout the 2019 offseason, the state of the New York Giants‘ quarterback room will be a highly debated and widely discussed topic around the NFL. Giants fans are split. Their beloved franchise hero, Eli Manning, is now 38 years old. He has received increased criticism over the past two years for his regressing performance. Taking his age and performance into account, fans and analysts have been debating whether or not the Giants should move on from Manning.

Since this is such a highly discussed topic, analysts have even asked Eli’s former teammates what they think. Eli is known for being a great teammate. He has strong relationships with his current and former teammates. Despite this, not everyone has defended him recently. Some former teammates have even admitted that they believe it is time for the Giants to acquire a new quarterback.

Former New York Giants receiver Victor Cruz has been asked about Eli on multiple occasions. In one impromptu interview with TMZ, Cruz was asked if he would bench Eli. His response: “Maybe, yes at the moment.Just to see what I got in my future. Just to see what’s going on.”

This interview took place midseason in November. Eli never did get benched, so the Giants do not know what they have as their future. Backup rookie quarterback Kyle Lauletta saw limited playing time in a blowout against Washington, but that’s about it. The future of the Giants’ quarterback position is still a huge question mark.

Fans believe the Giants will need to find their future franchise signal-caller this offseason, and a couple of Giants legend agree.

The wide receiver who caught Eli’s game winning touchdown pass in Super Bowl XLII has made his opinion very clear. Plaxico Burress believes the Giants should draft a quarterback this offseason. More specifically, Burress would like to see the Giants draft Ohio State quarterback Dwayne Haskins Jr. in 2019. On January 18, Burress stated hon FS1’s Undisputed: “My mindset is if Dwayne Haskins is available at the 6th pick, we gotta take him.”

This is the mindset of a lot of Giants fans. All over social media Giants fans are calling for the Giants to take Haskins in the 2019 NFL Draft. Some fans and analysts even think the Giants should trade up to ensure they get Haskins.

Former Giants Hall of Fame defensive end Michael Strahan has a different, but similar idea for the Giants in 2019. He too believes the Giants should draft a quarterback in 2019. However, he thinks the Giant should draft a different quarterback: Kyler Murray. Kyler Murray out of Ohio State is a controversial prospect who declared for the draft earlier this week. It is still not confirmed that he will choose the NFL over the MLB, but if he does, he could be a top ten pick in the 2019 NFL Draft.

Michael Strahan is a fan of Murray’s abilities. During an appearance on the Dan Patrick Show, Strahan discussed how he would handle the Giants’ current quarterback situation. He would handle it in a similar fashion to how the Giants handled it in 2004, when Eli was a rookie. When asked about his plan, Strahan said: “I’d draft (Kyler) Murray and then I’d let him learn from Eli for the year or eight, nine, 10 games.”

This is a plan plenty of Giants fans could get behind, whether it be Haskins or Murray. Regardless of who the Giants select in the 2019 NFL Draft, they must address the quarterback decision. The fans know it, the players know it, and the front office needs to know it too.