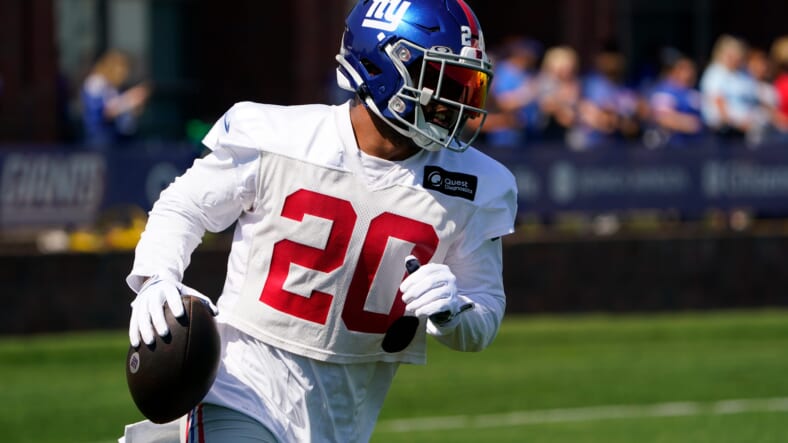 Julian Love is having a breakout season for the New York Giants, and his contributions could lead to a Pro Bowl appearance this season. In Sunday’s win over the Houston Texans, Love took over defensive play-calling duties for the first time this season with Xavier McKinney injured.

The playcalling was phenomenal, as the Giants’ defense allowed just one touchdown and recorded two takeaways in their 24-16 victory. Love added to his star-studded 2022 resume with this amazing display of leadership.

“It was a challenge, honestly,” Love said. “Guys are put into different roles and positions. It was a grind of a week. We really wanted to get on top of things. It wasn’t perfect. But guys stepped up.”

“[Julian Love] did a great job like he did all week leading up to it. Now he understands our system and I think he’s a good communicator, he’s intelligent. I think it was smooth. Really from his point to the second level of the defense to the defensive line. I think those guys did a good job of communicating throughout the game and obviously he’s the one that’s wearing the green dot and it starts with him.”

Love is in his fourth season with the Giants, and this season he has gotten a bigger opportunity, starting all nine games thus far, which is a new career high for Love.

In those nine starts, Love has put up very solid numbers, having 65 combined tackles (team high), 3 tackles for loss, 1 QB hit, and an interception (tied for team-high). He is on pace to shatter nearly all of his previous career highs in nearly every major category.

Love has established himself as a leader of Giants’ defensive coordinator, Don “Wink” Martindale’s defense, as well as one of the more reliable safeties in the NFL this season with his on-field performance.

Love has been superb manning the secondary for this rejuvenated Giants team, covering passes really well downfield and tightening up the overall team defense. This season, Love has allowed only 63% of his targets to be completed, a mark that is currently a career-best.

He has also missed just 2 of his 65 tackles this season, an extremely efficient mark which is also a career-best.

Love’s quick reaction time and good awareness allow him to be a weapon in the secondary, and he has been using those attributes of his to deflect deep passes downfield, cause incompletions, and secure tackles.

Another noteworthy aspect of Love’s game has been his superb red zone defense. On Sunday, Love stopped Dameon Pierce from getting into the end zone off of a short pass for a long gain, which would then be followed by a Texans fumble loss in the red zone two plays later, effectively taking momentum away from Houston.

Back in Week 7 against the Jacksonville Jaguars, Love thwarted the Jaguars’ final second attempt at a touchdown by making the game-saving tackle to stop Christian Kirk a yard short of the end zone as time expired to secure a Giants victory.

Love has been the catalyst to the Giants’ 6th best-rated defense in the NFL with his tenacious effort on defense.

Julian Love has been a large factor into the Giants’ surprise 7-2 start and a huge contributor to their defense’s success. If the success sustains, a Pro Bowl honor is in his sights. Love will look to continue his Pro Bowl campaign when the Giants take on the Detroit Lions in Week 11.