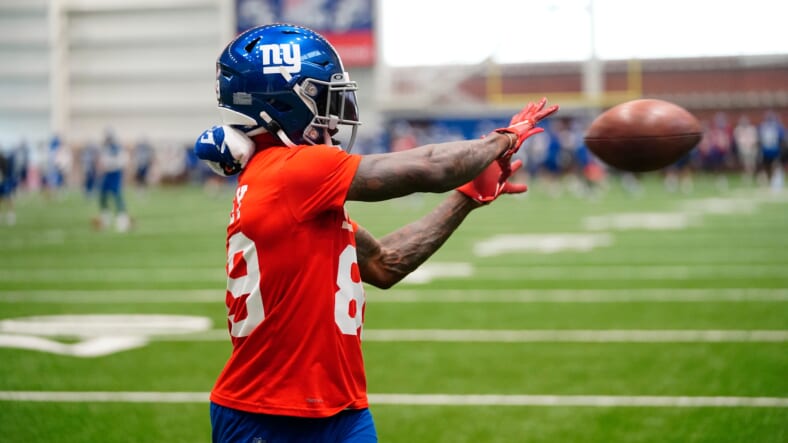 The New York Giants got a bit banged up during Thursday’s preseason game against the New England Patriots. While head coach Brian Daboll was trying to avoid significant injuries, some of his players picked up minor ailments that could force them to miss a bit of time.

The Giants have been without Azeez Ojulari since before training camp after he tweaked his hamstring during a private training session. However, Ojulari was activated from the physically unable to perform list on Sunday for the last day of camp, meaning he will participate and start to join his teammates in live-action drills.

There’s a ton of excitement surrounding Ojulari and rookie Kayvon Thibodeaux as a pairing. During his rookie campaign, Ojulari recorded 49 combined tackles, eight tackles for loss, 13 QB hits and set the rookie sack record for the Giants with eight. The hope is that combining him with Thibodeaux will provide the Giants with a dynamic young pass rush duo for the future.

The Giants have been monitoring Kadarius Toney closely after picking up a leg injury last week. He was ruled out of the preseason game against the Patriots and isn’t expected to practice this week as they reinforce his health and prepare him for the regular season.

After struggling with injury last year, many are concerned that Toney won’t be able to make it through a full season, officially being labeled as injury prone.

It is possible that Toney will be one of those players that are always hit with an injury designation but suit up on Sundays. He played through constant ankle pain last year, making a significant impact on the field. However, as one of the team’s more electric playmakers, he needs to be available, so being cautious right now is a good move by the Giants coaching staff.

Starting left guard, Shane Lemieux suffered a toe injury right off the bat in the team’s first series against the Patriots on Thursday. Lemieux is coming off a partially torn patellar tendon but sits in the lead for the starting LG spot. This may set him back, but his competitor, Josh Ezeudu, is also dealing with an injury that will limit his practice time this upcoming week.

Head coach Brian Daboll stated on Sunday that Lemieux could miss the first week of the regular season but was rather vague in his response. He’s kept most injury issues under wraps during camp, giving minimal information out for speculation.