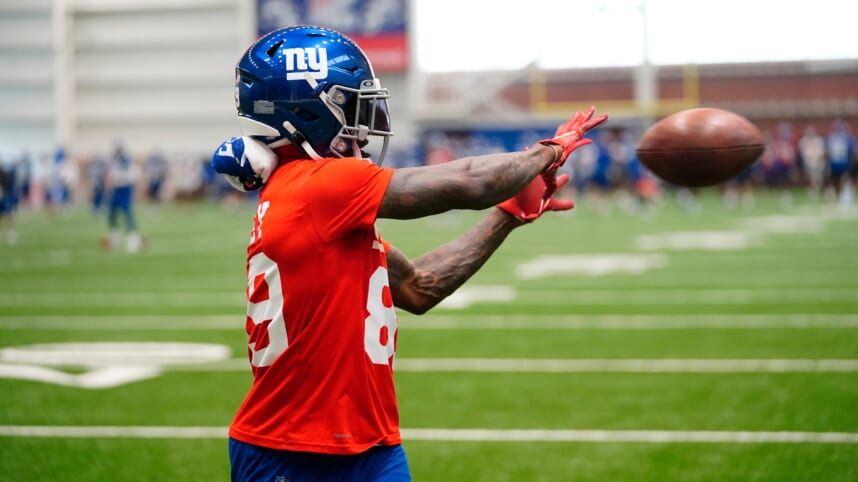 The New York Giants received a bit of reinforcement this past weekend against the Baltimore Ravens, adding Leonard Williams back to the defensive line and Wan’Dale Robinson to the wide receiver corps. However, the team is still thin at the pass-catcher position, with both Kadarius Toney and Kenny Golladay dealing with individual injuries.

Both Toney and Golladay seem to be far off from a potential return, but Giants head coach Brian Daboll stated on Wednesday that Toney wouldn’t be placed on injured reserve, which would keep him out for a minimum of four games.

Daboll also mentioned that Toney is healing, but I wouldn’t expect to see him for quite some time after aggravating the opposite hamstring he had been nursing for weeks.

Toney has only made two appearances this season against the Tennessee Titans and Carolina Panthers. He played in 12% of snaps in Week 1 and 38% of snaps in Week 2, failing to gain positive yardage in the passing game. He did rush twice for 23 yards, picking up a first down, but his impact has been next to nothing despite the Giants putting together a 5–1 record.

Ideally, Toney can rest up and make a return after the bye week 100% ready to go, which would offer the Giants a key piece on offense. There have been rumors regarding Toney’s availability in a potential trade, but given the Giants’ lack of depth at receiver, giving up on his talent now could end up biting them in the butt.

As for Golladay, he’s dealing with an MCL sprain that will likely keep them out for a few more weeks. Golladay was already being phased out of the offense before the injury, playing in just 42% of snaps against the Chicago Bears in Week 4. He’s now missed two consecutive games, and likely won’t make a significant impact the rest of the way, so we should anticipate general manager Joe Schoen releasing him and saving a little bit of cash after the 2022 season concludes.

Simply put, quarterback Daniel Jones doesn’t have a plethora of weapons to work with, but he’s making the most out of the options he does have. Robinson projects to become an integral piece to the offensive puzzle, but he only played in 23% of snaps against Baltimore, so we should anticipate a major increase against the Jacksonville Jaguars in Week 7.