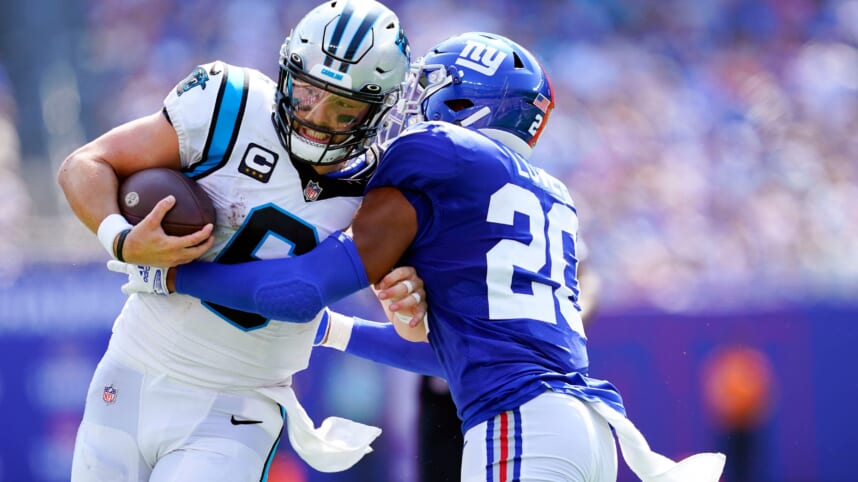 The New York Giants defense has been playing above expectations this season, especially without their two starting pass rushers and cornerback Aaron Robinson having his appendix taken out after Week 1.

Reserves and back-ups have had to supplement losses frequently, but the unit continues to dominate despite all the adversity. In fact, the Giants’ defense ranks top-12 in points allowed per game, passing yards allowed, and overall yards allowed. They’ve given up 18 points per game across two weeks, doing enough to give their offense a chance to overcome their own hurdles.

One of the New York Giants’ most underrated players:

One of the unsung heroes after two games is defensive back, Julian Love. The Giants have asked Love to serve a multitude of different roles since being drafted out of Notre Dame in 2019. He was a collegiate boundary cornerback, but he has transitioned to multiple positions over the past few seasons. In 2019, the Giants primarily had him playing slot corner and in the box, a far different role than he was used to.

In 2020, the Giants had him playing free safety primarily, splitting up his reps between the box, free safety, and slot corner last season. So far this year, he’s featured primarily as the team’s strong safety, serving as an integral piece of the puzzle in Wink Martindale’s defense.

So far this year, Love has recorded nine tackles, two pressures, including a sack and quarterback hurry. He’s given up 62 yards in coverage, allowing four receptions.

The former Fighting Irish has quietly carved out an essential role for himself. Against the Carolina Panthers, he executed a timely sack with Baker Mayfield trying to push his offense down the field and score in the final moments.

As good defensive coordinators do, Wink put his defensive players in a position to succeed. With a lack of pass rush given that Kayvon Thibodeaux and Azeez Ojulari are still nursing injuries, he’s relied on his defensive backs to pick up the slack.

Love did a fantastic job getting to the quarterback, with Xavier McKinney locking down Christian McCaffrey and rookie Dane Belton playing in centerfield.

After three years of Love trying to carve out a starting role, he’s found one in Wink’s defense.