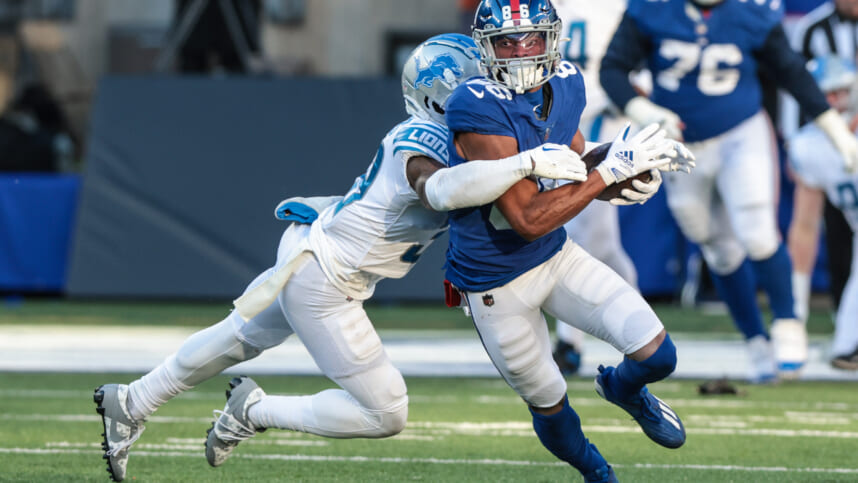 The New York Giants fell to the Dallas Cowboys in Week 13 on Thanksgiving, marred by an inefficient running game and lackluster passing game. Quarterback Daniel Jones finished with 228 yards on 21 completions, with Saquon Barkley running for 39 yards on 11 carries.

However, despite the Giants’ inefficiencies on offense, wide receiver Darius Slayton had himself another solid outing. Slayton hauled in three receptions for 63 yards, including a 44-yard leaping grab over a Dallas CB to set the Giants up within striking distance of the end zone.

The New York Giants are getting the most out of Darius Slayton:

The 25-year-old receiver has accrued 476 yards this season across 10 games with two touchdowns. Having not made his first reception until Week 4 after climbing his way out of the doghouse, Slayton has set himself up perfectly for a multi-your extension after the 2022 season concludes. Of course, drops will always remain a minor issue for the former fifth-round pick back in 2019, totaling two drops against the Detroit Lions in Week 11 and four on the season.

If Daboll can look past his drops and focus on the positives he’s brought to the Giants this season, he should remain with Big Blue moving forward and feature as a predominant player, even if they add more receiving talent this upcoming off-season.

Of course, having Slayton’s chemistry with Daniel Jones is essential, so depending on what the team does with Jones, extending him or letting him walk in free agency, his future could be directly tied to the quarterback.

Nonetheless, staying quiet and working his way out of the doghouse early in the season proved to be a primary variable in his increased production. Showing that type of work ethic undoubtedly put himself on Daboll’s good side.

A three-year deal with an out after the second season word $3-5 million per season could work. A three-year, $12 million deal with half guaranteed may get it done.