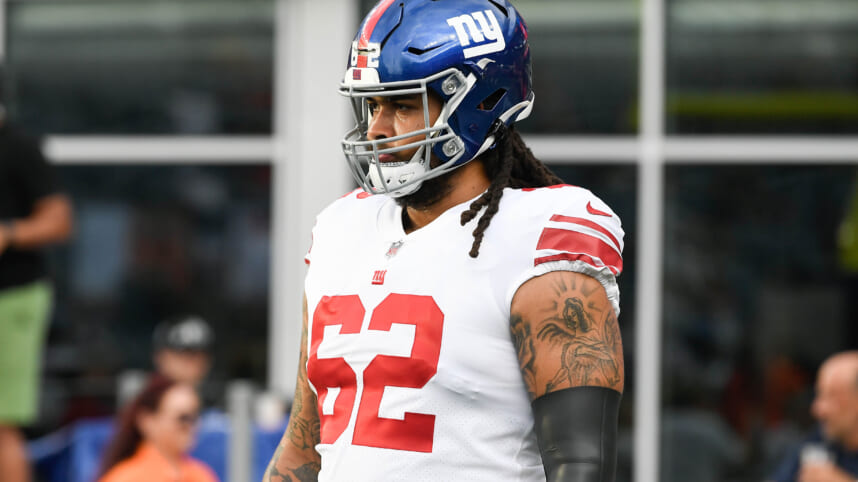 The New York Giants are preparing to cut their roster down to 53 men with the deadline at 4 PM on Tuesday afternoon. There will be a multitude of difficult decisions for the Giants brass, but one player who has made a great case for himself is Devery Hamilton.

Hamilton is a former undrafted free agent that signed with the Las Vegas Raiders in 2021. Hamilton didn’t play a single snap last year but has been a frequent flyer for the Giants this preseason, playing in 113 snaps in the first two games.

Over 113 total snaps against the Patriots and Bengals, he allowed three hurries, earning fantastic grades across the board, specifically in run blocking. He struggled a bit in pass protection against the New York Jets in the final preseason game of the off-season, but he’s done enough to warrant a roster spot.

“That’s fine,” said Hamilton after a stellar Week 1 pre-season performance, via PFF’s grades. “I like to take PFF with a grain of salt, try to just listen to my coaches, get their grading. At the end of the day we play offensive line, it’s five guys working as one. If I grade out at a certain level, cool, but at the end of the day the real stats are pass yards, rushing yards, things like that. Making sure that we play as one unit.

Head coach Brian Daboll attested to his qualities and success against the Pats and Bengals, and with the lack of depth at OT, he has a good chance of making the roster.

“He played a lot of plays in that preseason game, and he competed really well,” Daboll said. “He can play tackle. He can play inside. Another smart guy that’s doing everything that we ask him to do.”

Hamilton has also transitioned to guard at times playing LG for 19 snaps against Cincinnati. During the 2021 season, he also played at right tackle for Las Vegas, showing he can transition to multiple spots.

“Just showing that versatility, that flexibility. Things are a little different when you’re playing on the inside, things happen quicker, but at the end of the day I’ve just gotta use the talents and With Mangano leading the Giants due to a neck issue, the team was looking for death pieces they could rely on. It’s possible skills that I have and make them work.”

With Matt Gono leaving the Giants due to a neck issue, the team was looking for depth pieces they could rely on. It is possible they look to the waiver wire to help supplement some weaknesses, but in the meantime, Hamilton presents some value as a second-year player that has showcased good development this summer.

It is worthwhile keeping him around just so they can continue ironing out his game and alleviating other concerns. Having the versatility to kick inside is also a benefit, so he has a good chance of making the final cuts.