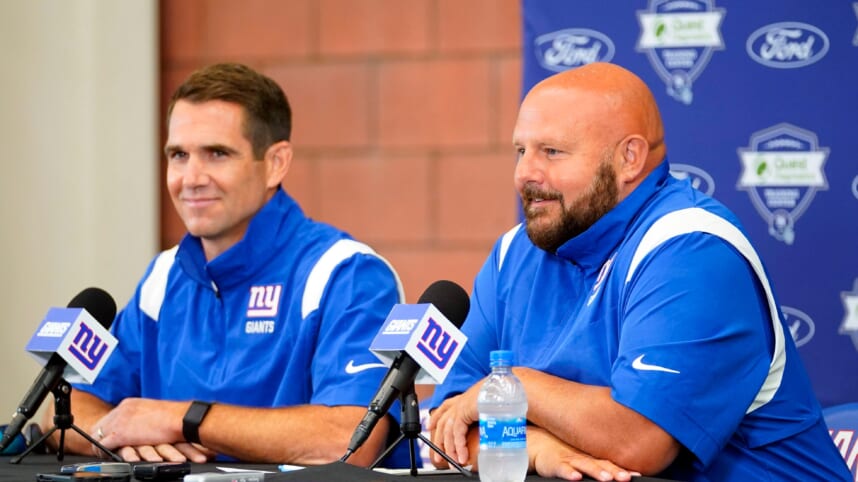 Working through the first year of a full scale rebuild, New York Giants general manager Joe Schoen is actively looking to improve the roster at every turn. He utilized 11 draft picks this year to set a new foundation but struggled to clear salary space after former GM Dave Gettleman left him with a mess to clean up.

However, Schoen is leaving no stone unturned to try and find talent, especially at a select few positions that could use a bit more competition. Notably, tight end and cornerback need depth, especially with training camp struggles and injuries mounting.

The only reliable tight end the Giants currently have on the roster is Daniel Bellinger, their fourth-round pick out of San Diego State this off-season.

Currently, Ricky Seals-Jones has been dealing with an injury for weeks, missing all of Training Camp. I wouldn’t be surprised if Schoen looked to acquire a TE via trade or via the waiver wire in the coming weeks.

“We’re gonna be open for business,” Schoen told co-hosts Bob Papa and Shaun O’Hara. “There’s some positions we need to upgrade, whether it’s the waiver wire, you can trade player for player. We’re going to explore all of those options over the next three or four weeks.

The New York Giants could use CB support:

In addition, the Giants also could use more help at cornerback, with Aaron Robinson showcasing an underwhelming performance against the New England Patriots during the team’s first preseason game. He was burned deep on multiple occasions and gave up a red zone touchdown.

Schoen has already claimed cornerback Olaijah Griffin from the Buffalo Bills, a player he’s likely familiar with. The team is looking for talent at every juncture as they jump-start their rebuild, so we should expect to see an active front office prior to the start of the regular season.

“Actually into the season we’ll continue to do that because you can get guys off practice squads, as well.”

Schoen also indicated they would be actively scouring other teams’ practice squads to find more talent. There are plenty of roster spots that will be open for the taking, even during the season, given the lack of depth at some positions. Nonetheless, this is the right approach for a team laying the groundwork after years of this management.