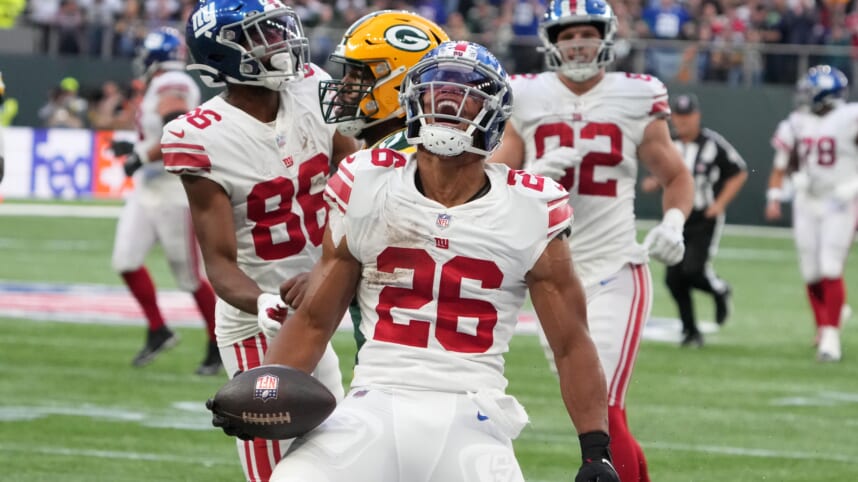 New York Giants star running back Saquon Barkley has completely flipped the script after two disappointing seasons plagued by injury. Barkley played only two games back in 2020 and 13 in 2021, failing to reach 600 yards on the ground in both seasons.

The value he’s brought to the team is undoubtedly forcing the hand of general manager Joe Schoen, who also views Saquon as an integral peace to their culture puzzle. The Giants have faltered over the past few seasons to generate a winning team, which has completely demoralized the roster. Sitting at 6–2 at this point in the campaign, the Giants have gotten a taste of what winning feels like and that has helped fuel a cultural rebuild.

However, Schoen comes from a Buffalo Bills front office that loves to pay their own players and retain talent that feeds into their strategy. Barkley seems to be one of those variables, which is exactly what he mimicked during an interview earlier this week.

“Saquon is a culture guy that fits into everything we’ve asked,’’ Schoen said. “He’s a captain and he’s a very good player at his position who’s having a very good season. So, he’s a guy obviously we’re going to do our due diligence on and we’d like to keep him around here, so we can get into contract extension talks.

The New York Giants are getting vintage Saquon Barkley:

Currently, it seems as if Barkley may shatter his 2018 numbers when he earned a Pro Bowl appearance at 21 years old. If he manages to set a new personal best, he will undoubtedly seek a significant deal in free agency.

The Giants could ultimately franchise tag him at a cheaper price point and retain him for the 2023 season before making a long-term decision, or they could settle on an extension over multiple years. One year off a down season may not be enough to justify a long-term commitment from the new Giants’ brass, but it is clear how much they value him. Without Saquon, the Giants’ offense would be inept, more-so than they already are.

The question is, how much is Barkley worth on the open market year over year? The Giants should utilize the franchise tag, which would amount to about $12.6 million, a solid number that would reduce his cost significantly compared to an extension. The tag for a quarterback is $31.5 million, so the best course of action would be to tag Barkley and extend Daniel Jones at a cheaper price-point.