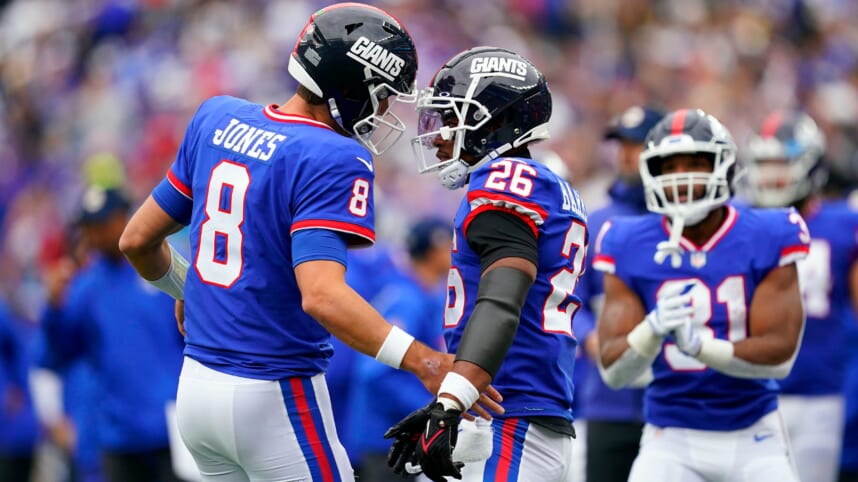 The New York Giants may not have the most talent in the world but they certainly have the most grit and a crew of phenomenal coaches. Over five games, the Giants sit 4–1 on the season, led by incredible play calling from offensive coordinator Mike Kafka and an aggressive defensive style curated by Wink Martindale.

Nobody expected the Giants to be such a potent team in the first year of a supposed rebuild, but they’ve found ways to win football games through discipline and execution. The Giants have exposed weaknesses facing opposing teams, notably putting pressure on MVP Aaron Rodgers in Week 5 and forcing him to settle for quick throws instead of targeting receivers down field.

In fact, Rodgers was 0–6 on attempts 20+ yards, showcasing the Giants’ resilient defense in the secondary.

Big Blue entered Week 5 ranked 19th in the NFL power rankings, but they shot up the board, now sitting at 13th after beating the No. 4 ranked Green Bay Packers.

The Giants aren’t the most talented team in the NFC, and they’re far from the healthiest, but they compete like hell and put themselves in the best position to win each week. We saw that again on Sunday in London, where Big Blue scored an eye-opening 27-22 comeback victory over the Packers. Defensive coordinator Don “Wink” Martindale cooked up a scheme that didn’t allow Aaron Rodgers to score chunk plays (Green Bay was shut out on offense in the second half), while the undermanned offense was once again the recipient of multiple impact plays from Saquon Barkley, who absolutely deserves to be in any MVP conversation through five weeks. Speaking of five weeks, that’s how long it took the Giants to match their win total from 2021.

The New York Giants are overcoming adversity from every direction:

Some may look at the Giants and wonder how they’ve managed to climb the rankings so fast, but phenomenal coaching and the unbelievable play of Saquon Barkley have provided them a jolt. In addition, the Giants have allowed the second-fewest completions in the NFL at 91, indicating the secondary has stepped up to the plate early in the season.

Impressively, the Giants have managed to do this with a slew of injuries hurting the roster. They managed to beat the Packers without Leonard Williams, Azeez Ojulari, Aaron Robinson, Kadarius Toney, Wan’Dale Robinson, or Kenny Golladay. Daniel Jones was hampered by an ankle injury, but he played lights out, completing 21 of 27 passing attempts.

With a tough Week 6 matchup against the Baltimore Ravens coming up, the Giants have an edge, given Martindale was their defensive coordinator for years. If anyone knows how to stop Lamar Jackson, it is Wink, so expect to see the Giants play plenty of “contain” and force Lamar to beat them with his arm. Jackson has gotten a lot of production out of deep passes the past few weeks, so expect safety Xavier McKinney to be busy this upcoming Sunday.