New York Giants enjoy visit from Odell Beckam Jr., is there anything there? 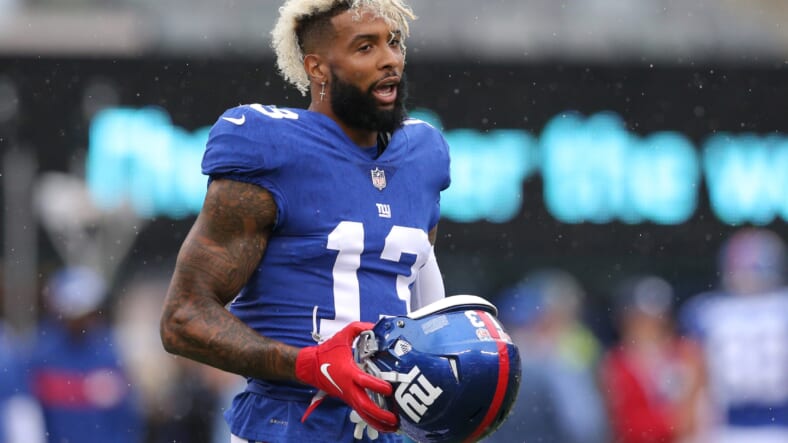 With the New York Giants wide receiver core dwindling down to a tree stub, it is no surprise that fans have been clamoring about the prospect of signing Odell Beckham Jr. to help the offense.

However, Beckham is still recovering from a torn ACL he sustained in the Super Bowl this past winter, but who’s to say he isn’t available in a few months when his knee is back in playing shape?

According to Josina Anderson of CBS, OBJ visited the Giants on Monday, the very same day Landon Collins worked out for his former team. Bringing in a few familiar faces undoubtedly causes excitement, but Beckham’s adventure seems to be more friendly than professional-based.

The 29-year-old receiver has plenty of friends still left in the building, notably Saquon Barkley and Sterling Shepard. With Shepard recently tearing his ACL a week ago, it is possible that the former All-Pro wide-out wanted to see how he was faring post-injury.

The New York Giants aren’t about to sign Odell Beckham Jr. yet:

With that being said, it seemed as if OBJ was just seeing a few friendly faces, but he might be doing his rounds for when he’s eligible to return in a few months. Last season for the Cleveland Browns and Los Angeles Rams, OBJ tallied 537 yards at five touchdowns but made a significant impact in the postseason. His last 1000-yard campaign was back in 2019 with Cleveland, as it seems the presence of Eli Manning helped elevate his metrics considerably during his prime years.

Given his financial demands, the Giants don’t have nearly enough capital to sign OBJ at this point in time, but as the season goes on and the weeks go by, his price tag diminishes.

Bringing him back would undoubtedly spark a few nostalgic memories from Giants fans, but this isn’t the same OBJ that once tortured the NFL between 2014–16. He’s coming off numerous season-ending injuries and will be fresh off another ACL tear.

However, he can’t be any worse than what the Giants have on offense right now, considering practice squad receiver David Sills currently features as the team’s top receiver after all the injuries.