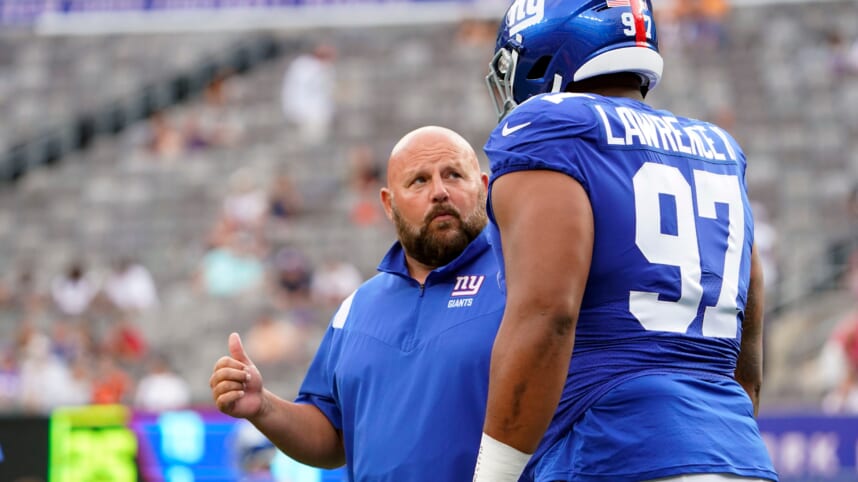 The New York Giants‘ rebuilt coaching staff has gotten the most out of their players during the 2022 season. Sitting at 5–1, players who once offered little to no production have now exploded onto the scene, putting together magisterial campaigns worthy of Pro Bowl selections.

One of those players is former 2019 first-round pick Dexter Lawrence, who the Giants expected to be an integral part of their defensive interior. Over the first three seasons of his career, Dexter failed to reach his potential, but he is elevating his game to a level nobody knew was possible in his fourth season.

At this pace, Lawrence is well on his way toward earning a pro bowl nod, let alone an All-Pro selection.

To put things into perspective, superstar Aaron Donald currently has 24 total pressures, four sacks, three quarterback hits, and 17 hurries forced. While his tackling metrics are a bit better, with 18 stops and not missing a single tackle attempt, his pass-rush numbers are quite similar to Lawrence’s.

There is a reason that Donald is the best interior defender in football, though, as he shows up every single game and produces elite performances on a regular basis. Lawrence has disappeared in the past but has played every game with admirable consistency through six weeks against a few tough opponents.

The Giants have already picked up the fifth-year option on Lawrence’s rookie deal, so he will be with the team during the 2023 season as well before he hits the free-agent market.

That is obviously a great reality for Big Blue, who viewed him as an essential piece to their defense. With the return of Leonard Williams in Week 6 against Baltimore, the Giants were able to produce plenty of interior pass rush, but of course, quarterback Lamar Jackson was able to escape on a few occasions.

Nonetheless, they were still able to sack him several times and force a game-winning fumble courtesy of rookie pass rusher, Kayvon Thibodeaux. Don’t discount the impact of Lawrence on that play, though, as the opposing offensive line was forced to double-team him, leaving Thibodeaux in a 1v1 scenario.