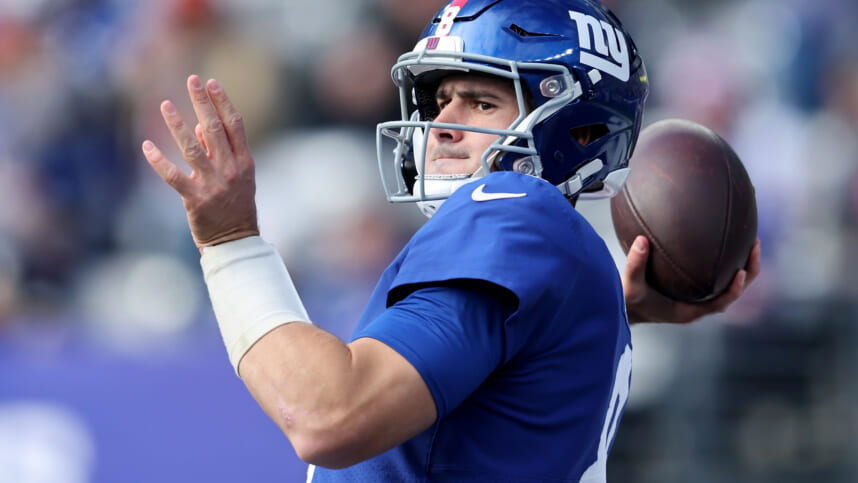 New York Giants quarterback Daniel Jones is making a strong argument that he should remain the team’s signal caller for the foreseeable future.

New general manager Joe Schoen elected to reject Jones’s fifth-year option, forcing him to rise to the occasion and prove his worth after a tumultuous first three years in the NFL. Jones’s statistics continued to degrade under the leadership of Jason Garrett, tossing just 2,428 yards last year, including 10 touchdowns and seven interceptions in 11 games.

Across nine games this season, Jones has thrown for 1,596 yards, eight touchdowns, and two interceptions with a 65.8% completion rate, the highest in his career. On the ground, he’s rushed for 387 yards and three touchdowns. He is on pace to break his career high of 423 rushing yards back in 2020 by a significant margin, showcasing how the Giants are finding ways to protect him and utilize his legs to their maximum potential.

The evolution of DJ has been fun to watch this season, but he’s standing out in several impressive categories that indicate his development.

After fumbling 19 times during his rookie season, Jones has cut that number down to just three this year over the first nine games of the season. The coaching staff has done a tremendous job utilizing play action and bootlegs to curate more time in the pocket for Jones, hiding some of the vulnerabilities on the offensive line.

In addition to his reduced fumble metric, he’s only thrown two interceptions this season, with the first one coming against the Tennessee Titans in Week 1 and the next against the Dallas Cowboys in Week 3, a product of David Sills slipping at the apex of his route.

Cutting down turnovers at this rate has given the Giants an opportunity to stick in games against better teams. When you win the turnover margin, winning becomes a lot easier, which is something Jones has learned from Brian Daboll.

The Giants have minimal talent at the wide receiver position, especially with big-money pass catcher Kenny Golladay struggling to find a role in Mike Kafka’s offense. Jones has had 14 passing attempts result in drops, including four against Dallas and eight in his most recent four games. With a 65.8% completion rate, that adjusts to 78.7% after considering catchable passes and drops.

In other words, Jones has been very accurate with the football this season, earning an 80.7% completion rate on short throws and 52.5% on medium throws. Most of his drops have come in the short/intermediate range, accounting for 11.

Once the team finds a few sure-handed receivers to help alleviate that statistic, Jones’s production should increase with it. Nonetheless, these two categories clearly showcase his growth and how outside variables are impacting him negatively at times.