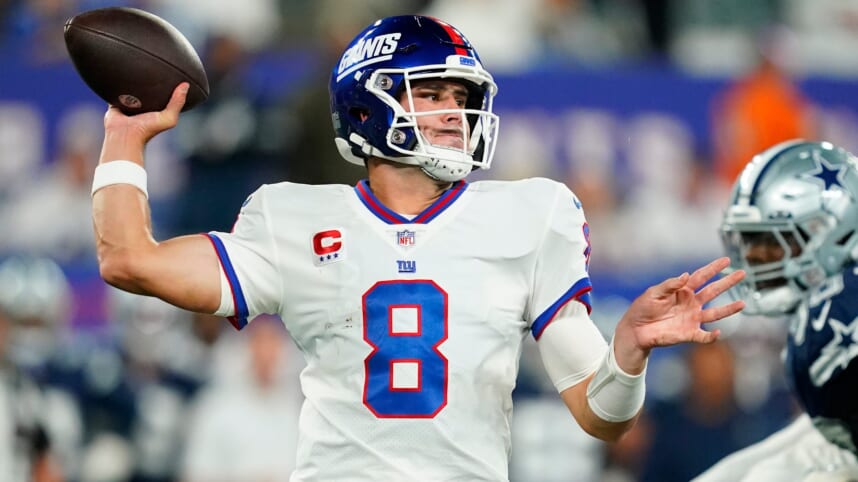 New York Giants quarterback Daniel Jones (8) throws against the Dallas Cowboys in the first half at MetLife Stadium on Monday, Sept. 26, 2022. Nfl Ny Giants Vs Dallas Cowboys Cowboys At Giants

The New York Giants have a few big decisions to make this upcoming off-season, notably at the quarterback and running back positions. Both Daniel Jones and Saquon Barkley will be hitting the free agent market after Big Blue rejected Jones’s fifth-year option and Saquon finishes his own fifth year on his rookie deal.

The question is, how much money are the Giants willing to spend at either position, given Jones isn’t necessarily proven and Saquon plays a position that has polarizing value?

General manager Joe Schoen had already been negotiating with Saquon‘s representatives, but they tabled discussions until after the season. It is possible that the team franchise tags Barkley at about $12 million, but they may want to show more love for arguably their best player. A multiyear deal certainly fits the bill but considering he’s only had half of a dominant season coming off years of injury-riddled play, paying him top dollar isn’t a suggested course of action.

Considering the Detroit Lions shut him down for 22 yards on 15 carries in Week 11, the Giants are seeing the limitations of their offense led by Barkley. Without a passing game, it doesn’t matter how much they pay the star running back. Jones, on the other hand, could land a myriad of different deals, whether it be a one-year prove-it contract or a heavily guaranteed deal over fewer years but higher money.

According to Jordan Raanan of ESPN, the Giants may have to dish out a deal worth over $25M for Daniel Jones.

“While far from perfect, he’s young and ascending, and upward of 12 teams will need new quarterbacks next season,” ESPN NFL front-office insider Mike Tannenbaum said. “The ball-security issue that plagued him over his first three seasons [36 fumbles] is largely under control this year.”

Tannenbaum doesn’t think Jones will get anything less than $25 million per year, citing the supply and demand with the position.

The New York Giants would likely prefer to avoid the franchise tag for Daniel Jones:

The franchise tag for a quarterback in 2023 settles in at about $31.5 million, a number that goes beyond Jones’s production. The Giants’ quarterback has completed 183 passes this season for 1,937 yards, nine touchdowns, and four interceptions. He threw two interceptions against Detroit, doubling his season total, but has otherwise reduced his turnover problem significantly.

The problem is, getting rid of Jones opens up yet another hole, so unless Schoen is willing to move up in the draft to land a quarterback or look toward the free agency/trade market, they may have no choice but to stick with Jones over the next few seasons.

At the end of the day, the 25-year-old signal-caller has witnessed extraordinary growth this year, but in a heavy passing offense, we don’t know how he will respond. The Giants have relied on the running game and manufacturing production on shorter pass concepts via play-action, but Jones has shown the ability to make tough throws and maneuver in the pocket with comfort.

The Giants brass has spoken highly of Jones and his work ethic, and given how he’s responded this year, all signs point toward his retention, but the cost could certainly strap the Giants down in free agency. Nonetheless, they have plenty of money opening up in the future and can easily structure contracts around that, providing them more freedom to sign players.