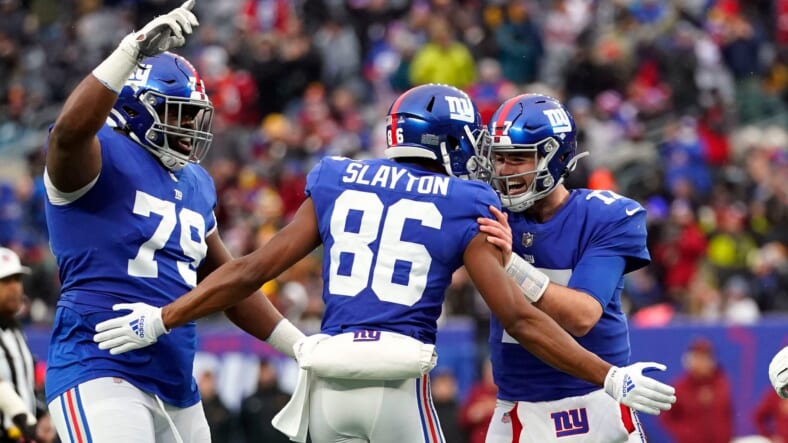 Heading into Tuesday, the New York Giants had negative salary space to work with. However, they converted $17.88 million of Leonard Williams’s contract into a signing bonus, clearing $12 million of cap space.

The unfortunate side is that the restructure adds a void year worth $6 million for the 2024 season. In addition, the Giants would only save $12 million next year if they cut Williams, which was previously $18 million, a substantial difference.

On Wednesday, though, the Giants made another move to clear some salary space, agreeing with wide receiver Darius Slayton to cut his pay for the 2022 season.

Slayton was in line to earn $2.5 million, well above his pay grade given the statistics he displayed in 2021. He recorded just 339 yards and two touchdowns with a 44.8% catch rate. Given his usage is primarily reliant on deep concepts and go routes, it is no surprise the Giants convinced him to stick around on a lesser deal.

Slayton will reduce his salary hit from $2.5 million to just under $1 million. The team will save about $1.6 million in available salary space, giving them a bit more flexibility if they need to sign players due to injury or inconsistencies.

Slayton does have value, though, since he did record 740 yards and eight touchdowns during his rookie season back in 2019. His stats have slowly degraded over the past two years, leading up to a dismal performance last season.

This was ultimately a good move for Darius, who likely would’ve had to compete elsewhere for starting snaps and lose out on that money anyway. Agreeing to a pay cut allows him to remain a fringe starter and compete for more opportunities in a modernized offense that will likely extrapolate on player strengths.