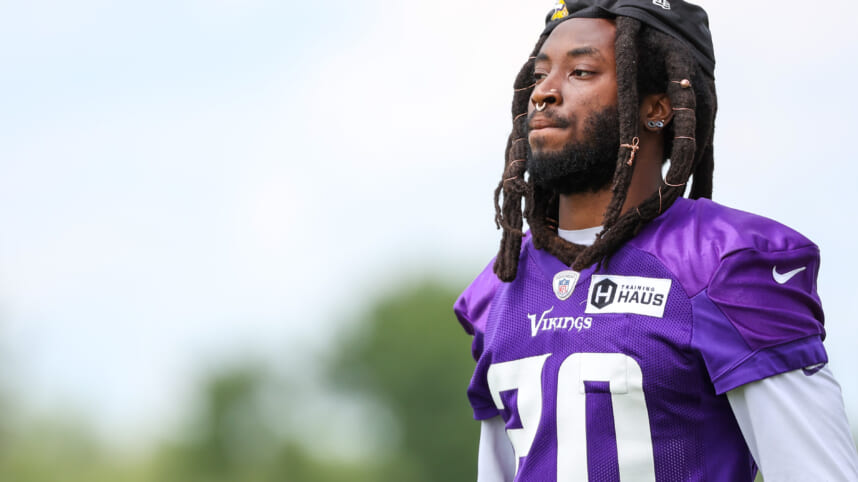 The New York Giants, unfortunately, announced that training camp star receiver Collin Johnson suffered a torn Achilles during Wednesday’s practice. Johnson looked phenomenal during the first two preseason games against the Patriots and Bengals, but his season was cut short due to the significant injury.

General manager Joe Schoen didn’t waste a moment replacing him on the roster, claiming two wide receivers off waivers and adding a cornerback.

To fill the vacancies on the roster, the Giants were awarded three players off waivers, cornerback Harrison Hand and wide receivers Jaylon Moore and Bailey Gaither.

The Minnesota Vikings drafted Harrison Hand in the 5th round back in 2020 out of Temple. Hand played in 163 snaps as a rookie, giving up 138 yards and a touchdown, collecting one interception and two pass breakups.

Harrison was the only waiver wire claim that has NFL experience. At 5-foot-11 and 185 pounds, he’s played in 23 games with one start over the past two seasons.

The Giants also claimed Jaylon Moore, a practice squad player from the Baltimore Ravens. At 5-foot-11 and 191 pounds, Moore has never made an appearance in an NFL game, spending four seasons at Tennessee-Martin. He recorded 92 passes for 1,492 yards and 18 touchdowns. He will immediately begin competing for a roster spot, but the cards are undoubtedly stacked against him.

In addition to more, the Giants also claimed Bailey Gaither, a 6-foot and 188-pound rookie undrafted free agent. He was signed by the Green Bay Packers in 2021 but announced retirement early in training camp. The Ravens eventually signed him this off-season. He played in five seasons at San Jose State during his collegiate career.