New York Giants bring Eric Ebron in for a tryout – should they sign him? 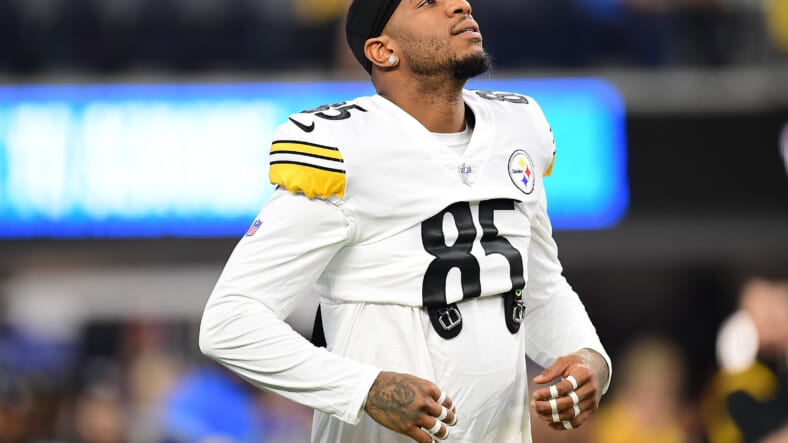 The New York Giants are kicking off training camp this week. The long summer is finally over and New York Giants football is finally back in action. The rookies reported early for camp last week and the Giants were brought some disappointing news. Rookie tight end Daniel Bellinger was placed on the PUP (physically unable to perform) list with a quad injury. In response to this news, the Giants brought in a group of players for a tryout this week. Veteran tight end Eric Ebron participated in the try-out and he could make a lot of sense as a late-summer signing for the Giants.

Why Eric Ebron could make sense for the Giants

The New York Giants are shockingly thin at tight end. The Giants are severely lacking depth at the position and need to explore options to remedy the situation. Free agent tight end Eric Ebron seems to be one of the strongest options for the Giants to consider.

Eric Ebron spent the 2021 season with the Pittsburgh Steelers where he played in eight games, making three starts and hauling in 12 receptions on 18 targets. Ebron totaled 84 yards (7.0 y/r) and one touchdown with the Steelers last year before an injury cut his season short. This was his second season with Pittsburgh. In 2020, Ebron had an impressive season where he tallied 558 receiving yards and 5 touchdowns for the black and yellow squad.

Giants fans might be familiar with Eric Ebron. He was the tenth overall pick in the 2014 NFL Draft. Many Giants fans were hoping to see the UNC prospect fall into their laps with the twelfth pick. Instead, the Detroit Lions drafted Eric Ebron, and the New York Giants drafted fellow current-free agent Odell Beckham Jr two picks later.

Eric Ebron has spent eight seasons in the NFL with three different teams. His 2021 season was cut short by a knee injury, but Ebron says he is healthy and ready to go for the 2022 season. The Steelers are unlikely to re-sign Ebron at this point as they are developing young tight ends on their roster already.

The New York Giants would be wise to sign Eric Ebron. He seemed to have plenty left in the tank in 2020 and his knee is healthy after surgery in 2021. There is no telling when Daniel Bellinger will be ready to return. In the meantime, adding some depth to the roster will only strengthen the Giants.