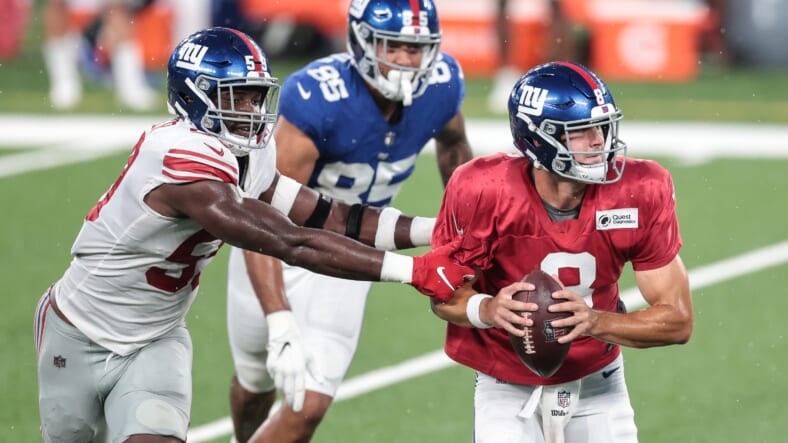 Football is almost here. The 2020 NFL season is set to kick off in just a little over a week from today. The New York Giants are entering the new season with a brand new coaching staff and a revamped roster.

Much has been said about the Giants’ offseason moves. They put a heavy emphasis on the defensive secondary and offensive line, but there were other positions they did not address with as much priority.

Regardless of the team’s roster-building strategies, there are two ways that this season can go: good or bad. But what does good and bad look like for the 2020 New York Giants?

In order for the Giants to be a competitive team during the final weeks of the season, a few things need to happen. Firstly, the team needs to end the season with seven or more wins. That has not happened since 2016, four years ago, nearly half a decade ago.

Secondly, the Giants need to see their second-year quarterback develop. Daniel Jones showed a lot of promise and potential in his 2019 rookie campaign. But, he was a rookie, and he made plenty of rookie mistakes. Hopefully, Daniel and Jason Garret iron out those mistakes and mold a more polished quarterback in 2020.

Thirdly, the Giants’ defense simply has to be better. They were really bad defensively in 2019. Just be better. Seeing some improvement in the secondary and out of the pass-rushers will be a big step in the right direction for this young Giants football team.

The best-case scenarios are not completely realistic for the Giants this year. This is not a team that anyone should expect to see win the Super Bowl. But the worst-case scenarios, on the other hand, are considered by some to be very realistic.

I am a believer in Daniel Jones. I think he will improve this year. But not everyone is a believer in our team’s young quarterback. And, I’m never wrong, but what if I do turn out to be wrong about this one? What if the nonbelievers are right? If Daniel Jones goes through a sophomore slump, the Giants are going to be put in a really awkward position.

If for whatever reason, Daniel Jones actually plays worse this season, there is a good chance the Giants, given the state of the rest of the roster, could end up with the top pick in next year’s draft. Now, no one wants to see Daniel Jones fail (except for Pro Football Focus). We all want to see him succeed with the Giants and be the next face of the franchise. But the Giants are in a tricky position this year.

A hectic offseason impacted by COVID-19, a general manager (who drafted Jones) on the hot seat, and a young roster with plenty of injuries scares already piling up. That is what the Giants are dealing with heading into 2020. If all of this culminates into the perfect storm, the Giants could somewhat realistically see their season go straight down the toilet. In this worst-case scenario, New York could find itself with the first overall pick in 2021.

The first overall pick in 2021 will be Trevor Lawrence, no matter who is picking, as long as he declares. If the Giants end up with that pick, that likely means Daniel Jones played really poorly in 2020 and Trevor Lawrence will probably be too good to pass up next offseason. Lawrence is the next generational quarterback prospect, according to most analysts. Those are so rare- Joh Elway, Peyton Manning, and Andrew Luck are the only collegiate quarterback prospects that consistently receive the “generational” tag. In this worst-case scenario for the Giants, there is no choice but to move on from our beloved Danny Dimes.

Good thing this is just a scenario. This will not happen, I am certain of it (though there are some people pretty convinced that this will happen). The Giants are an improved team with an improved coaching staff this season. I expect to see them have a season closer to the best-case scenario than to the worst-case scenario.