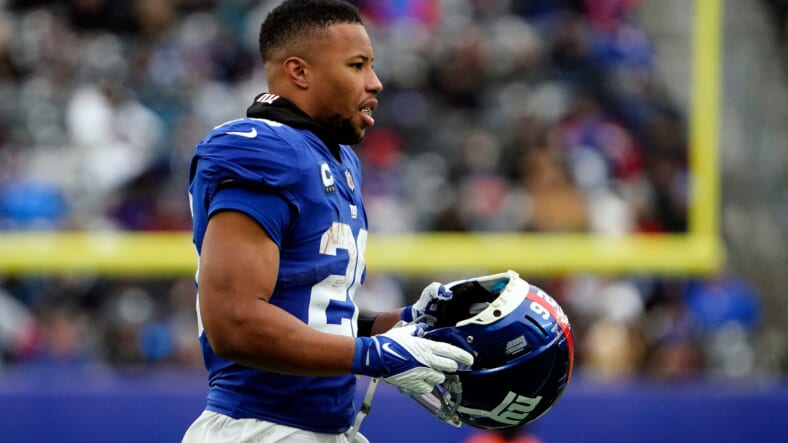 The New York Giants and star running back Saquon Barkley tried to engage in a potential contract extension negotiation after the trade deadline, but the two sides fell short of completing anything. In fact, discussions will be tabled until after the 2022 season concludes, opening up Saquon’s options on the free-agent market.

The New York Giants and star running back Saquon Barkley will table any talks about a new contract until after this season, league sources told ESPN.

The Giants were never going to be able to sign Barkley to an extension now, especially since they haven’t even had an opportunity to test the market (although they hold little leverage). The Giants likely lowballed Barkley, and they could still franchise tag him instead of letting him walk as a free agent for more money.

Realistically, he should be earning somewhere in a similar realm to Dalvin Cook and Derrick Henry, which is just south of $14 million per season. It is possible he’s looking for a contract north of that, and coming off several years of injury-plagued seasons, his leverage will only take him so far. However, reports indicate that Barkley’s reps view him in the same price range as Christian McCaffrey, who’s earning $16 million per season. Injury history revolving around running backs would highly suggest that’s not a good idea.

However, he’s in the middle of a resurgent 2022 campaign, tallying 779 yards on the ground and five rushing touchdowns to go with 189 receiving yards. He’s recorded over 100 yards in three games this year, including two games with over 145 yards on the ground.

The New York Giants are hoping to extend Saquno Barkley over tagging him:

At this point in time, it is clear that Barkley looks like his old self, which is exactly what general manager Joe Schoen and head coach Brian Daboll wanted to see. He is a massive part of the team’s offense, but Schoen doesn’t have a history of overspending on running backs during his days with the Buffalo Bills as an assistant GM.

Barkley is different, though, he is a captain, leader, and elite player when healthy. He has the capacity to change a game in the blink of an eye, and the Giants have plenty of draft capital to continue retooling the roster in conjunction with paying Saquon his worth.

The question is, how much will other teams be willing to offer Barkley on a long-term deal? The Giants shouldn’t wait around to find out. Their message should be simple — either you accept the deal we offer or we tag Barkley and keep him in New York regardless. Of course, Schoen would like to keep his star player happy, so disrespecting his value isn’t ideal.